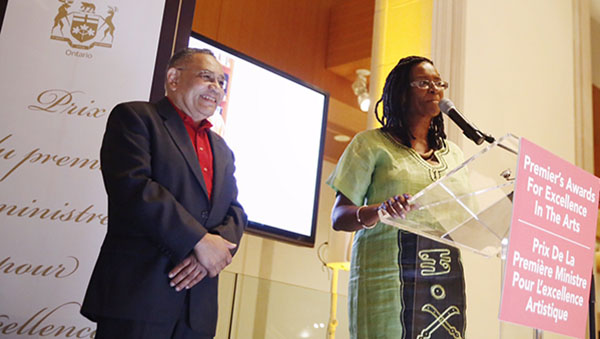 TORONTO, Ontario October 21, 2016 (PRIDE) — An intellectual hub in the African Canadian community, A Different Booklist, an independent bookstore and literary cultural destination in Toronto, won the Arts Organization Award, earlier this month, at the Premier’s Awards for Excellence in the Arts.

At a reception held at the Art Gallery of Ontario, Premier Kathleen Wynne honoured the winners of the 10th annual awards presentation. The other winners are Indigenous artists, Christi Belcourt and Christian Chapman. Two African Canadian poets, George Elliott Clarke and Dwayne Morgan, were among the finalists for the Individual Artist Award.

The awards program recognizes outstanding artists and arts organizations for their contributions to Ontario’s vibrant arts and culture sector.

“Ontario’s art sector reflects the drive, talent and diversity of our province. I am honoured to recognize the outstanding winners and finalists of the 10th annual Premier’s Awards for their passion, dedication and commitment to excellence. Thank you for enriching our daily lives and inspiring us all,” said Premier Wynne.

A Different Booklist is respected nationally and internationally for its specialty in books by African-Canadian and Caribbean writers.

“It’s a great honour. It recognizes that the bookstore has become a key important institution for our community, that it’s irreplaceable to have an institution like this which represents the traditions, the culture, the history of our people, housed in a bookstore. And that is why a bookstore is so important to our community and to the wider public because where else would they go to find evidence of that cultural history,” says Miguel San Vicente, co-owner with his wife, Itah Sadu, of the bookstore.

He says the bookstore allows “our young people to have access to that and allows our scholars to have a place to present their literature to the community outside the academic word. It also allows for a space for new and emerging authors to display their works.”

Since everything in life is connected to books, A Different Booklist also serves as a meeting point and hub where generations and ideas can intersect, as well as a catalyst for multiple conversations.

From across the province to across Canada and beyond, the bookstore’s focus on diversity, equity and social justice has enabled it to partner with and support innovative diverse literary projects, reflecting the Canadian mosaic.

The small local bookstore has become an engaging space and gathering place for many in the Black and Caribbean communities in Toronto, and is now known as A Different Booklist Cultural Centre.

Last month, from September 29 to October 1, the bookstore held the 4th annual Black and Caribbean Book Affair and honoured the legacy of the strident and pioneering newspaper, Contrast, at 28 Lennox Street in Toronto.

Contrast, founder by Al Hamilton of Edmonton, Alberta, was known as “the eyes, ears and voice of the Black community” and existed from 1969-1991. 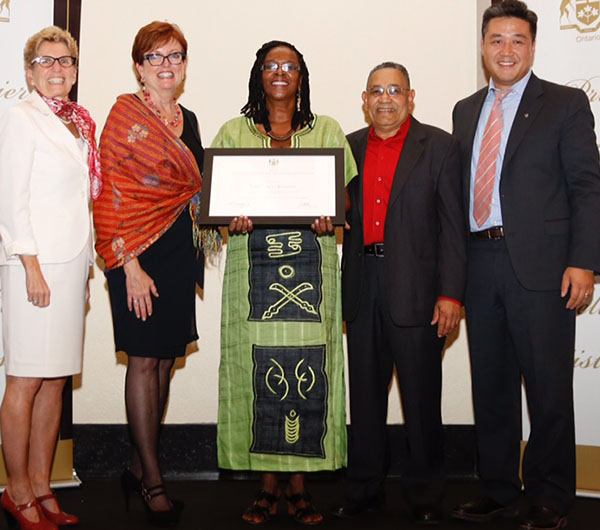 A Different Booklist is also involved with an exhibition, “Welcome to Blackhurst Street,” which opened on October 15 and runs until November 27 at Markham House in Mirvish Village.

Curated by designer, Chinedu Ukabam, it is an exhibition that commemorates and celebrates the Black history of Bathurst and Bloor using archival material and original artwork.

“The exhibition also examines the current state of the community and its future role in shaping our City. Conceptualized as an immersive exploration of black artistry, activism, and entrepreneurship the installation weaves together elements of visual art, photography, archival documents, video, sound, and found objects from the Contrast Archives, Honest Ed’s, the Mirvish Family Collection, and other sources,” notes a press release.

It is also made possible by ERA Architects, Monograph Design, and the Ontario Black History Society.

The bookstore has been behind initiatives such as the Emancipation Day Underground Freedom Train Ride; the naming of a bench in honour of Gwen and Lenny Johnston – founders of Third World Books and Crafts – outside Bathurst subway station; the naming of benches to recognize the contribution of several African Canadians to the arts in Ontario at the Harbourfront Centre; an annual “Walk with Excellence” of high school students, starting at C.W. Jefferys and ending at York University – a public demonstration of student achievement, and many other ventures.

A Different Booklist also played a seminal role in the Toronto Public Library naming a collection that was the brainchild of veteran librarian, Dr. Rita Cox – the “Rita Cox and Caribbean Heritage Collection.”

Belcourt is a Michif (Métis) visual artist and author whose ancestry originates from the Métis historic community of Lac Ste. Anne, Alberta. She won the Individual Artist Award.

Like generations of Indigenous artists before her, she celebrates the beauty of the natural world while exploring nature’s symbolic properties.

Her work can be found in the public collections of the National Gallery of Canada, the Gabriel Dumont Institute, the Indian and Inuit Art Collection, the Art Gallery of Ontario, the Canadian Museum of History and the Thunder Bay Art Gallery.

In 2014 she won the Ontario Arts Council Aboriginal Arts Award and in 2016 was named an inaugural winner of the Governor General’s Innovation Award.

Chapman, an Anishinaabe visual artist and filmmaker from Fort William First Nation, was honoured as Emerging Artist of the Year.

“The winners of this year’s Premier’s Awards for Excellence in the Arts exemplify the talent, passion and vitality that Ontario’s arts community is known for. Congratulations on this well- deserved honour, and thank you for all you do to inspire us, challenge us and bring beauty to our lives,” said Eleanor McMahon, Minister of Tourism, Culture and Sport.

The Premier’s Awards are open to artists and arts organizations engaged in any professional arts practice in Ontario whose artistic work or service spans a significant period of time.

“Congratulations to Christi Belcourt, A Different Booklist, and Christian Chapman on receiving the 10th annual Premier’s Awards for Excellence in the Arts. Each of this year’s winners show how the arts can bring together communities, draw attention to crucial issues, and inspire us to see the world from new perspectives. My thanks to them, and all of this year’s finalists, for their outstanding work,” said Rita Davies, Chair, Ontario Arts Council.

The awards are administered by the Ontario Arts Council. Winners are selected by jury, and the Emerging Artist of the Year is chosen by the winner of the Individual Artist Award.

Nominations for the 2017 awards are being accepted until December 1, 2016. All Ontarians are invited to submit a nomination.