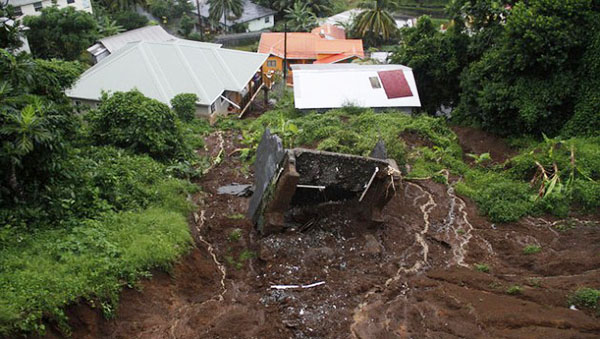 Torrential rains from trough systems in St. Vincent and the Grenadines in November 2016 resulted in landslides like this one, which swept one structure away and threatened nearby houses. Photo credit: Kenton X. Chance/IPS.

KINGSTOWN, St. Vincent and the Grenadines, March 6, 2017 (IPS) — Caribbean leaders worry that with climate change sceptic Donald Trump in the White House, it will be more difficult for small island developing states facing the brunt of climate change to secure the financing necessary to adapt to and mitigate against it.

Mere days after Trump’s inauguration, the White House ordered the Environmental Protection Agency to delete a page about climate change from its website. It has also also signalled its intention to slash the budget of the NOAA, the U.S.’s leading climate science agency, by 17 percent.

If Trump follows through on his campaign promise to roll back his predecessor, Barack Obama’s, green legacy, it seems inevitable that Caribbean and other small island developing states will feel the effects. Trump had also explicitly vowed to stop all US payments to UN climate change programmes.

In this archipelagic nation, the Ralph Gonsalves administration spent some 3.7 million dollars in November 2016 – about 1 per cent of that year’s budget – cleaning up after a series of trough systems.

The sum did not take into account the monies needed to respond to the damage to public infrastructure and private homes, as well as losses in agriculture resulting from the severe weather, which the government has blamed on climate change.

“The United States is one of the major emitters of greenhouse gases and, for us, the science is clear and we accept the conclusion of the Inter-Governmental Panel on Climate Change,” Prime Minister of St. Vincent and the Grenadines Ralph Gonsalves told IPS.

He said his nation’s commitment is reflected not only in the fact that St. Vincent and the Grenadines was one of the early signatories to the Paris Agreement at the end of COP 21, but was also one of the early ratifiers of the agreement.

The Paris Agreement sets out a global action plan to put the world on track to avoid dangerous climate change by limiting global warming to well below 2 degrees Celsius. During the election campaign, Trump vowed that he would pull the U.S. out of the deal if elected, although there appears to be some dissent within the administration on the issue.

“I have listened to President Trump after the election and he had said that he is keeping an open mind on the question of man-made climate change.” — PM of St. Vincent and the Grenadines, Ralph Gonsalves

It was reported this week that Patricia Espinosa, executive secretary of the UN Framework Convention on Climate Change (UNFCCC), which oversaw the Paris deal, is visiting the US and had requested a meeting with Rex Tillerson, the secretary of state, and other officials over the commitment of the new administration to global climate goals.

So far, Espinosa says she has been snubbed, and a state department official told the Guardian there were no scheduled meetings to announce.

The official added: “As with many policies, this administration is conducting a broad review of international climate issues.”

Small island developing states have adopted the mantra “1.5 to stay alive”, saying that ideally global climate change should be contained to 1.5 degrees Celsius above pre-industrialisation levels if their islands are to survive. 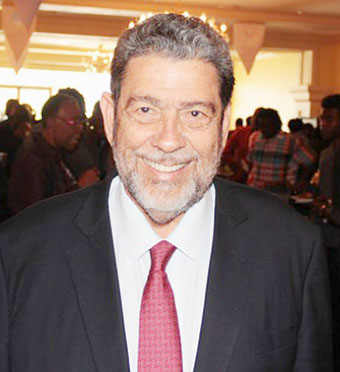 Gonsalves is hopeful that Trump would modify the policies outlined during the election campaign.

“I have listened to President Trump after the election and he had said that he is keeping an open mind on the question of man-made climate change,” he told IPS.

Gonsalves noted, however, the developments regarding the removal of climate change references from the White House website, adding, “But I would actually wait to see what would actually happen beyond what takes place on the website.”

The prime minister noted to IPS that the United States is an extremely powerful country, but suggested that even if Washington follows through on Trump’s campaign pledges, all is not lost.

“The United States of American has a population of 330 million people. Currently, in the world, there are seven and a half billion people … There is a lot of the world out there other than 330 million [people] and the world is not just one country — though a hugely important country.”

But Kingstown is not just waiting to see where Trump goes with his policy on climate change.

Come May 1, consumers in St. Vincent and the Grenadines will begin paying a 1 per cent “Disaster Levy” on consumption within the country. The monies generated will be used to capitalise the Contingences Fund, which will be set up to help offset the cost of responding to natural disasters.

In presenting his case to lawmakers, Gonsalves, who is also Minister of Finance, said that there have been frequent severe natural disasters in St. Vincent and the Grenadines, particularly since 2010, resulting in extensive loss and damage to houses, physical infrastructure and economic enterprises.

“The central government has incurred significant costs in providing relief and assistance to affected households and businesses and for rehabilitation and replacement of damaged infrastructure. Indeed, we have calculated that no less than 10 per cent of the public debt has been incurred for disaster-related projects and initiatives, narrowly-defined,” he told Parliament during his Budget Address in February.

As part of the Paris Agreement, developed countries said they intend to continue their existing collective goal to mobilise 100 billion dollars per year by 2020 and extend this until 2025. A new and higher goal will be set for after this period.

Gonsalves said it was not anticipated that the Paris Agreement would have been signed and ratified by November 2016. “But it was done. The anticipation was that it was going to take several years longer, so they put the commitments from 2020.

“Now, what are we going to do between 2017 and 2020?” he told IPS, adding that one practical response is to push for the pledges to come forward.

As Caribbean nations do what they can, locally, to respond to the impact of climate change, they are hoping that global funding initiatives for adaptation and mitigation do not take on the usual sluggish disbursement practices of other global initiatives.

Prime Minister Roosevelt Skerrit told leaders of the 15-member Caribbean Community at their 28th Inter-Sessional Meeting in Guyana in mid-February that it was critical the Green Climate Fund be more readily accessible for countries trying to recover from the aftermaths of climate-driven natural disasters.