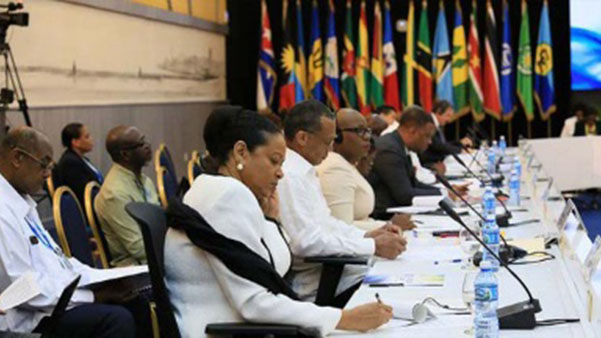 Cuba Agrees To Extension On Trade Agreement With CARICOM

HAVANA, Cuba, March 13, 2017 (CMC) – Cuba is providing the Caribbean Community (CARICOM) countries with an extension of the agreement on trade and economic cooperation, which facilitates access to the Cuban market for hundreds of CARICOM products, according to an official statement issued here, today.

It said that the issue was discussed at the fifth CARICOM-Cuba Ministerial meeting that was held here last Saturday.

According to the statement, the agreement also provides for trade between the parties.

Last month, the Guyana-based Caribbean Community (CARICOM) Secretariat said the 15-member regional integration movement had reached an agreement with Cuba on the expansion of preferential access to each other’s markets.

In a brief statement, the Secretariat said that the agreement was reached during the 10th meeting of the Joint Commission, established under the Trade and Economic Cooperation Agreement between CARICOM and Cuba held in Guyana, late last month.

“A significant number of items from the Community, including beer, fish and other agricultural products, and manufactured goods, have been approved for entry into the Cuban market, free of duty, once both sides formalise the agreement.

“CARICOM member states have also agreed to grant duty-free access to Cuban goods, including pharmaceuticals. More developed countries (MDC) in the community will also determine the level of preference they will grant to Cuba on a number of other items,” the secretariat said.

In the statement released by the Cuban government, Havana said its cooperation with the Caribbean has a “high social impact” and made reference to the number of Caribbean nationals undergoing study, here, in various fields, including medicine and sports.

“Both parties worked on the identification of financial and technological resources to implement cooperation,” the statement added.

“The high level Caribbean meetings in Havana also highlighted the need for Latin America and the Caribbean to unite to face external challenges, international uncertainty and to guarantee the independence, development and well-being of our region.”

The statement noted that the Latin American and Caribbean region was ratified as a zone of peace and that Cuba wanted to thank the “Caribbean for its solidarity and courageous support, and will continue to share its modest achievements with the Caribbean”.

“It was agreed that the sixth CARICOM-Cuba Summit will be convened in Antigua and Barbuda in December 2017,” the statement said, noting that the first was held in 2002, and every three years afterwards.