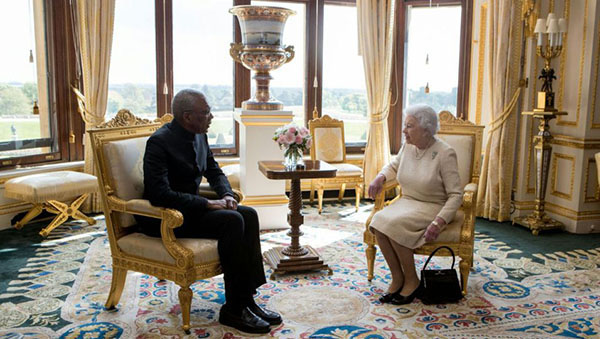 GEORGETOWN, Guyana, May 1, 2017 (CMC) – Guyana’s President, David Granger, met with Queen Elizabeth II, last Thursday, at Windsor Castle, in a private meeting, during which he said discussions centered around the Queen’s Commonwealth Canopy (QCC), a network of forest conservation initiatives, which involves all 52 countries of the Commonwealth.

These discussions were held in the context of Granger’s ‘green’ State development agenda.

The meeting marks the first time a Guyanese Head of State has met with Queen Elizabeth II in the United Kingdom (UK), and Granger believes that relations between the two countries are ‘becoming warmer’.

He added that the relationship between Her Majesty’s government and the Cooperative Republic of Guyana has benefitted, immensely, from the interactions, during his visit.

He noted the significance of the meeting, stating that although he is not in the UK on an official State visit, he was able to meet with Her Majesty, who remains an influential world leader.

“The Queen is Head of the Commonwealth. When she adopts a program, which is a ‘green’ program, which is entirely consistent with Guyana’s ‘green’ agenda, it is very significant for Guyana and Guyanese and, of course, she is a very influential person from a moral point of view; intellectual, philosophical point of view around the world… I can say that it was of the utmost significance for me and for Guyana that she, since 2015 at the Commonwealth Heads of Government meeting in Malta, laid out this policy of the Queen’s Commonwealth Canopy… As Head of State, it was an honour for me to meet the Queen and to share the vision of, not only a Green State, a Green Guyana, but also a Green Commonwealth,” he said.

The President said that he will continue to promote the concept of environmental protection and preservation as Chairman of CARICOM, while ensuring Guyana’s commitment to becoming a ‘green’ state remains undiminished.

“[The Queen] is convinced that this is the way to save the earth, to save the Commonwealth, to save our country and I’m in full support of her,” he said.

The President also expressed Guyana’s gratitude to Her Majesty for Britain’s support on the implementation of the Security Sector Reform Action Plan in Guyana.

In January this year, the UK military officer, Russell Combe, arrived in Guyana to oversee the implementation of the Plan.

This matter was also emphasised during President Granger’s meeting with Foreign Secretary, Boris Johnson, which was held, last Wednesday, at the House of Lords.

The President said the meetings have augured well for Guyana’s relationship with the UK, at both a governmental and private sector level.

“The main takeaway is Guyana’s commitment to continuing as a member of the Commonwealth and as a State that is attractive to investment from British investors; a State that is organised and administered on the principles of accountability and transparency and a State that is friendly to investors. And in meeting with Foreign Secretary Johnson, he is quite aware of the issues affecting Guyana and we saw eye to eye on those issues,” the President said.

Queen Elizabeth II visited British Guiana first in the year of the former colony’s Independence, in February 1966, and then again in February 1994, which was the first post-independence trip she made to Guyana.