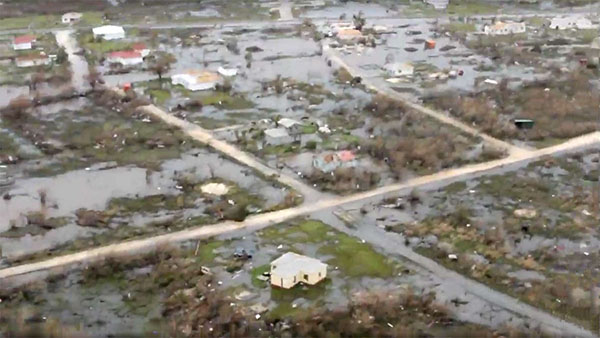 Barbuda, pictured from above, after the devastation caused by Hurricane Irma. Photo credit: ABS TV/Radio.

PORT OF SPAIN, Trinidad and Tobago, September 7, 2017 (CMC) – The Trinidad and Tobago government has announced plans to send a helicopter and crew to Antigua and Barbuda, to assist the twin-island state in relief efforts, following the passage of Hurricane Irma.

On the island of Barbuda, over 90 percent of the buildings have been destroyed.

Prime Minister of Antigua and Barbuda, Gaston Browne, who toured the island late yesterday, declared Barbuda a disaster zone and implemented a state of emergency.

In a statement, today, the Office of the Prime Minister, here, said the Keith Rowley-led government has been communicating with the Ggovernment of Antigua and Barbuda, with respect to the devastation suffered.

“The government has agreed to provide assistance to Antigua and Barbuda, by providing a helicopter and crew for the period of a week, to directly contribute to the provision of relief and aid for Barbuda,” the statement said.

It added that the government “has carefully considered the current difficult economic circumstances and, despite these difficulties, because it recognizes the responsibility of helping our CARICOM (Caribbean Community) neighbour in this time of disaster and need, it has agreed to provide this specific assistance”.

Meanwhile, the powerful storm, this morning, plunged over one million residents of Puerto Rico into darkness when it passed to the north of the island.

Irma is expected to graze the Dominican Republic before targeting the Bahamas and Turks and Caicos Islands, tomorrow.

The Miami-based National Hurricane Centre in its advisory, this afternoon, said the distinct eye of Hurricane Irma was located near latitude 20.7 North, longitude 70.4 West.

Irma is moving toward the west-northwest near 16 mph (26 km/h), and this general motion is expected to continue for the next couple of days, with some decrease in forward speed.

On the forecast track, the eye of Irma was expected to continue to move between Hispaniola and the Turks and Caicos Islands, by this afternoon.

The hurricane will then move across the southeastern Bahamas, by this evening, and then be near the central Bahamas by tomorrow.

Irma is a category 5 hurricane on the Saffir-Simpson Hurricane Wind Scale.