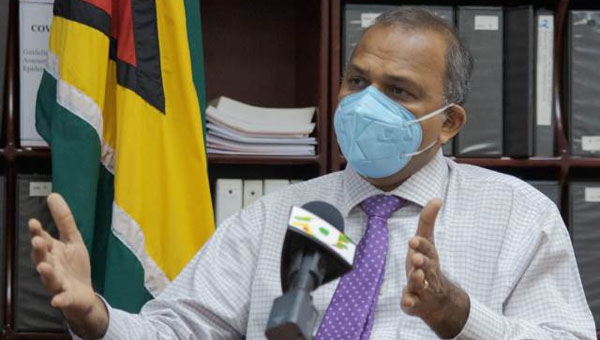 Dr. Anthony explained, that although the results of another testing technique, the TR-LAMP, has been submitted by travellers in other countries, Guyana’s protocols remain the same.

“Well, first of all, I don’t know how widespread this technique is, in terms of testing… but RT-LAMP basically means reverse transcriptase loop mediated isothermal amplification; what that really means is, the technique used for the testing has been varied, slightly.

“What it really does, when you use the word isothermal, it means it’s running the amplification at a fixed temperature, which is 65 degrees Celsius, which differs from what we do with PCR, where we have a variable temperature,” the Health Minister elaborated.

Minister Anthony said this new testing technique for COVID-19 is relatively new and it has not yet been used widely.

He also noted that most countries have already built their capacities to do PCR test, and the RT-LAMP technique would need to show major changes for Guyana to adopt it.

“We have all the equipment to do PCR, and while this is supposed to be a simplification, unless the cost is going to be significantly less, meaning equipment and reagents, I don’t see a lot of countries converting to this. So right now, as far as I’m aware, there’s very limited use of it….

“Some countries might prefer that, but what is the standard protocol that has been adopted by most countries in the world is, to use the RT-PCR, which most countries now have the capability of doing, which has general accessibility and that’s what we are using,” he further explained.

Along with the PCR test, Guyana is also using specific antigen tests. These test kits produce results faster than the PCR test. Initially, these were ordered for use in the far-flung areas of the country; however, they have also been used in emergency cases at local hospitals to determine a patient’s COVID-19 status.

Meanwhile, Minister Anthony disclosed that, as of Monday evening, 232,599 persons — 47.8 percent — have received their first dose of a COVID-19 vaccine; and 107, 421 have been fully vaccinated, reflecting 22.1 percent of the country’s adult population.