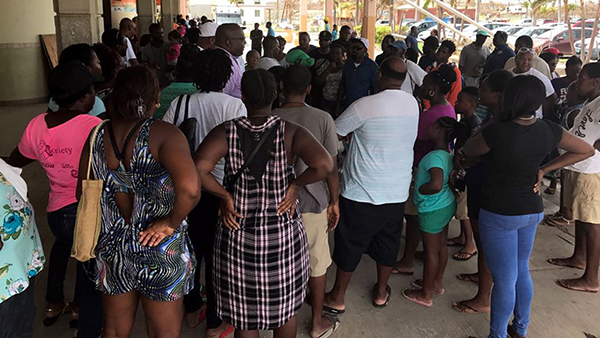 BASSETERRE, St. Kitts-Nevis, September 14, 2017 (CMC) – The government of St. Kitts-Nevis has offered to accommodate secondary school students, from islands that were severely affected by the passage Hurricane Irma, and who are registered to sit Caribbean Examination Council (CXC) exams.

The Dr. Timothy Harris-led administration has offered temporary accommodation, in response to the needs of those affected countries, as they seek to rebuild and return to a state of normalcy.

Harris was part of an Organisation of Eastern Caribbean States (OECS) Monetary Council delegation, which visited the storm-affected island of Anguilla, yesterday, where he met with over 100 St. Kitts and Nevis nationals, and identified focal points of assistance.

One area of concern, identified during that consultation, was the consideration for students of those affected countries, particularly those who are registered to sit CXC exams.

As a result, Harris announced that accommodations are being made for displaced students, from Anguilla, St. Maarten and the British Virgin Islands, who are registered for upcoming CXC exams.

“These persons will be offered free enrollment in our schools until their own high schools are ready to accommodate them. We have prioritized those who are about to write the CXC exam…because the only high school in Anguilla has been significantly damaged – maybe 90 percent of it.

“The Government of Anguilla has said that they would be ready for October. That is, as it is, a prediction, an expectation, but the parents and guardians are concerned that they may have a long time, and they are rightly concerned, if they think that their students will be disadvantaged from a long closure of the high school,” said Harris during a press conference, today.

In addition, the government has made its hospitals available to residents of neighbouring islands, should the need for health services be required.

St. Kitts and Nevis has also offered the Robert L. Bradshaw International Airport as a staging platform for relief efforts to St. Barths, St. Eustatius, French St. Martin, Saba and Dutch St. Maarten, and has also provided diplomatic clearance for foreign vessels that could not safely get into the waters of French St. Martin.

The Prime Minister also revealed that the federation has provided entry to 251 persons, who were processed at the sea ports.

He also said that the government is prepared to assist in the restoration of electricity supply to Anguilla and to any other island that requests such assistance.

“In our moment of great need, when persons here were becoming impatient after a hurricane…when electricity had gone out as a result of fallen pole lines and poles etc., it was the good Government of St. Lucia that volunteered – they didn’t let us come to ask – it volunteered the services of several persons to assist in the restoration of our electricity supply.

“We are grateful for the assistance of the Government of St. Lucia. We want to return the favour to other countries similarly displaced, as we were the recipient of the good graces of another country,” the prime minister said.

He stressed that these outreach efforts, being made available by the St. Kitts and Nevis Government, are manageable and “will make a significant difference in the efforts to restore those countries, now impacted, to a state of normalcy”.