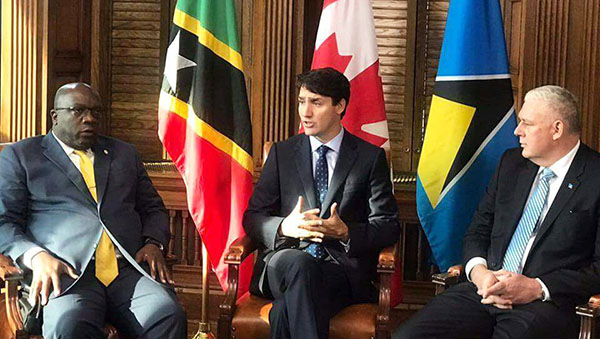 TORONTO, Ontario, September 27, 2017 (CMC) – A high-level delegation from the Organisation of Eastern Caribbean States’ (OECS) Monetary Council has arrived, here, for talks with top Canadian financial institutions, including the Royal Bank of Canada (RBC), The Bank of Nova Scotia (Scotiabank) and the Canadian Imperial Bank of Canada (CIBC).

The delegation is led by the Chairman of the nine-member OECS sub-regional group and St. Lucia’s Prime Minister, Allen Chastanet, and includes St. Kitts-Nevis Prime Minister, Dr. Timothy Harris, as well as the Governor of the Eastern Caribbean Central Bank, Timothy Antoine, and senior representatives from the International Monetary Fund (IMF) and the World Bank.

“This important meeting comes as Eastern Caribbean countries continue to engage with leading financial institutions, to shore up the sub-region`s monetary policies and position it as a top investment destination,” said a statement, issued by the St. Kitts-Nevis government.

It added Prime Minister Harris used the occasion to highlight the “longstanding relationship between Canadian banks and the Eastern Caribbean”, and also sought clarity on issues of cooperation and the need to resolve challenges, in the context of an uncertain global economy.

It further stated that among the critical issues discussed, were de-risking, correspondent banking relationships and their implications for the financial stability and growth of the Organisation of Eastern Caribbean States (OECS).

In the context of the devastation being experienced, as a result of Hurricanes Irma and Maria, the delegation also sought solidarity and cooperation, as the impacted Eastern Caribbean islands begin to recover and rebuild.

The delegation urged the Canadian financial institutions to continue considering the longstanding benefits, derived from the Caribbean region, and encouraged them to pursue communication and dialogue as they make far-reaching decisions.

Building on the successful outreach campaign with the financial institutions in Toronto, the OECS delegation travelled to Ottawa, the Canadian capital, to meet with Prime Minister, Justin Trudeau.

The meeting on Parliament Hill is expected to touch on the important Canadian-Caribbean partnership, trade and investment, Canada`s role in hurricane recovery efforts, as well as Canada`s hemispheric leadership on the critical issue of climate change – an issue the Caribbean deems paramount, following this month`s devastating hurricanes.

A St. Kitts-Nevis government release said that “Prime Minister Harris views this opportunity as timely and intends to seek closer cooperation among Canada, the Federation of St. Kitts and Nevis and the Organisation of Eastern Caribbean States (OECS), across a host of issues.” 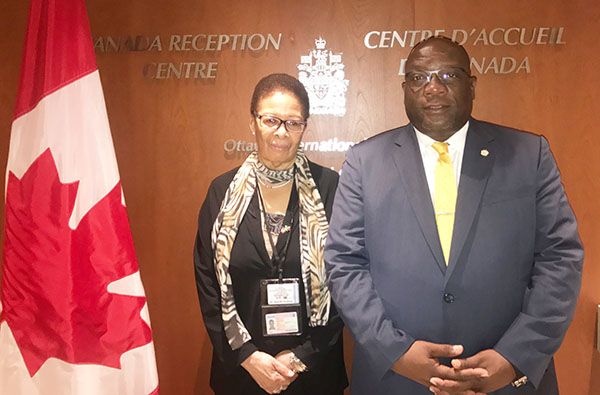 “That the meeting is happening now is a result of a deliberate strategy by St. Kitts-Nevis and the OECS, to bolster diplomatic engagement with Canada, particularly as the Canadian government steps up its assistance and commitment to the hurricane-ravaged islands of the Eastern Caribbean,” the release added.