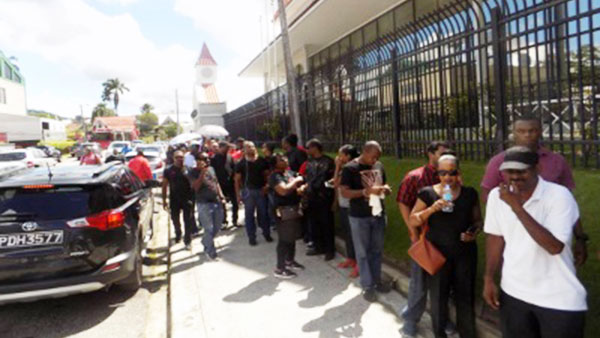 “Prison officers, and by extension their families, no longer feel safe in Trinidad and Tobago, and there is no indication that anything will change anytime soon. We are going through with what could be, the only life-saving step for both our members and their families,” said Ceron Richards, the President of the Prison Officers Association (POA).

Richards, who led more than 50 officers and their families to the Canadian High Commission, here, yesterday, to request asylum in Canada, said that he is disappointed in the government’s response to increasing attacks and even the murder of several officers.

He added that the Association exhausted all its options in trying to meet National Security Minister, Edmund Dillon, but despite repeated assurances from officials, they are no closer to a meeting to address security concerns.

“We have been trying to get this government to treat the safety and security of our officers. We are not of the belief that the government is taking our issues seriously. We have recommended introduction and implementation of laws to treat with the protection of not just prison officers, but all law enforcement officials. All our cries have fallen on deaf ears,” Richards said.

Richards hinted that if asylum is granted, prison officers may leave en masse.

“We have done all that we can, under the sun. This is not a matter that has only now come about…it is one that has spanned decades; we are now at the mercy of the criminal element.”

Speaking on a radio program here, today, Richards said that the government should also look at providing a licenced firearm to prison officers, after going through stringent measures.

Last month, a prison officer was shot and killed, less than a month, after another was murdered at a bar by a former prisoner.

Glenford Gardener, 44, was gunned down outside his home in Diego Martin, west of here, and media reports said that he may have been killed because of a search, which happened at the Port of Spain Remand Facility, resulting in the seizure of several smart phones and weapons.