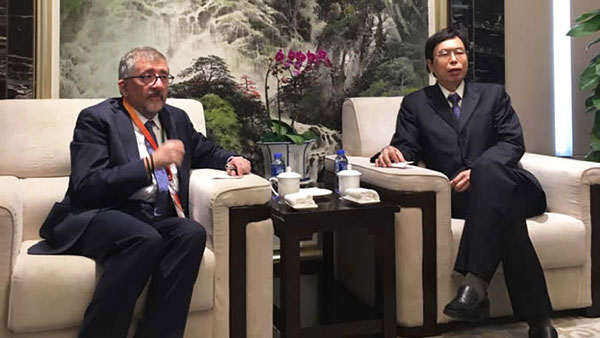 Mario Cimoli, Director of ECLACs Production, Productivity and Management Division (left) with Vice-Minister, FANG Aiquing of the Ministry of Commerce of the Peoples Republic of China.

BEIJING, China November 13, 2017 (CMC) – The Economic Commission for Latin America and the Caribbean (ECLAC) says it is strengthening its cooperation with China, in order to foster trade and investment with the region.

In this regard, ECLAC, on Friday, said the director of the Production, Productivity and Management Division and Officer-in-Charge of ECLAC’s International Trade and Integration Division, Mario Cimoli, met the day before with government authorities from China, and participated, as the main speaker, in the China-Latin America and the Caribbean International Exposition (CLAC Expo), one of the biggest business gatherings between both areas.

ECLAC said Cimoli, who represented Alicia Bárcena, the organization’s executive secretary, met with Vice Minister, FANG Aiquing, of the Ministry of Commerce of the People’s Republic of China (MOFCOM).

FANG was presented with a copy of ECLAC’s most recent institutional report, “International Trade Outlook for Latin America and the Caribbean 2017”,translated into Mandarin Chinese, ECLAC said.

“The vice minister specially thanked the Commission for its efforts to disseminate its most important publications in that language, which will undoubtedly allow for the two sides to grow closer,” ECLAC said. “He also recognized ECLAC’s valuable participation as co-organizer of the CLAC Expo.”

At the opening event of the CLAC Expo in the city of Zhuhai, Cimoli made a presentation before an audience of more than 800 government authorities, scholars and high-level business executives from China and Latin America and the Caribbean, in which he highlighted the creation of this gathering, which “allows for our region’s products to be known in the Asian giant and, therefore, provides greater visibility.

“This is clear proof of China’s policy of inclusive globalization and a growth process that is apt for all economies in their different modes of development,” said Cimoli, who also emphasized the conclusions presented in its report, which projected 23 percent growth in regional exports to China in 2017 – “far above the rate forecast for shipments to other regions of the world”.

Concerning the need to boost multilateralism and move toward strongly-integrated development processes, he said, “Integration between the region and China must be oriented toward the creation of inclusive globalization and supporting the [United Nations] 2030 Agenda and the United Nations Sustainable Development Goals.”