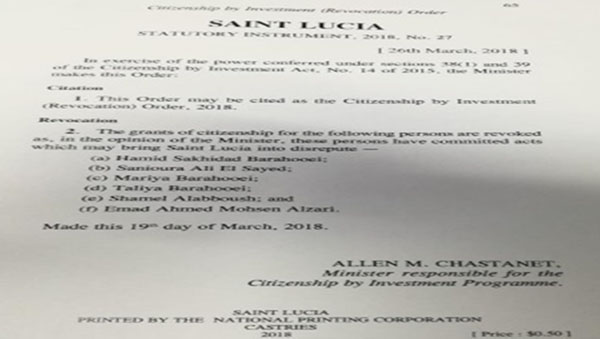 The notice, posted in the official St. Lucia Gazette and signed by Prime Minister Allen Chastanet.

CASTRIES, St. Lucia, March 28, 2018 (CMC) – The St. Lucia government has revoked the citizenship, granted to six people under the controversial Citizenship by Investment Program (CBI), claiming that they had committed acts “which may bring St. Lucia into disrepute”.

The statement gave no other reasons for the revocation, nor did it state whether the persons, in question, had been residing on the island.

Under the CBI, St. Lucia, like several other Caribbean countries, provides citizenship to foreign investors, who make a significant financial contribution to the socio-economic development of the islands.

Last month, the Chief Executive Officer of the Citizenship by Investment Unit, Nestor Alfred, said that 259 people had been granted citizenship under the program, even as he acknowledged that citizenship had been revoked in some instances.

“We have had instances in this program, where we have gotten the all-clear from our law enforcement and we have denied citizenship to those persons, because there may be some relevant information that those persons may have not given to us. For example, were they holders of a second passport?

“They may not disclose the fact that they are shareholders of six companies. They may not have told us that their spouse was arrested for some criminal matter. On that premise, irrespective whether they have been cleared by law enforcement, we would have denied them citizenship,” he told a news conference last month.