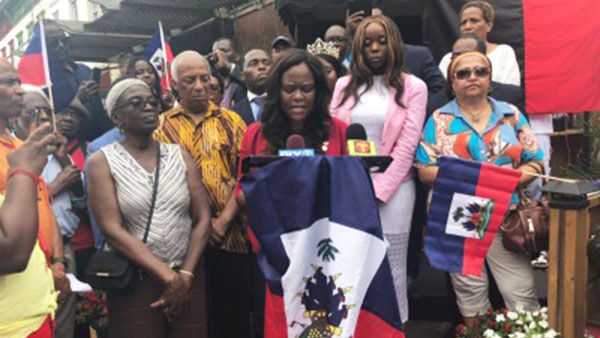 The unveiling ceremony took place on the boulevard that is situated in the heart of Little Haiti BK (Brooklyn).

“Jean-Jacques Dessalines is an individual whose historical importance is difficult to understate,” said Bichotte, the representative for the 42nd Assembly District in Brooklyn.

“He was a man, who led the first successful slave revolt in world history and, in so doing, created the first free Black Republic in the Western Hemisphere, and the second independent country in the region, right after the United States of America gained its independence in 1776.

“With this street co-naming, we are undoing, in a concrete and tangible way, centuries of the trivialization of our history,” said Bichotte, the first Haitian-American in New York City to be elected to the New York State Assembly.

“Now, tens of thousands will walk the streets in Central Brooklyn and see the name of Jean -Jacques Dessalines. Many will be encouraged to learn about him, his compatriots and their accomplishments.”

Williams, who introduced the proposal for the co-naming of the street in New York City Council, noted the powerful symbolism of Jean-Jacques Dessalines Boulevard.

“Jean-Jacques Dessalines was a revolutionary, who fought for his people and overthrew an oppressive regime that brutally enslaved and persecuted the Haitian people,” he said, adding “this revolutionary spirit, to fight for independence against oppression, burns bright in Haitian culture today”.

“Haiti and its proud people are an intrinsic part of my district, and it is only right to honour that spirit with this co-naming,” he said.

“The Haitian-American community in Brooklyn has a proud, meaningful, and legendary history that embodies the spirit of Haitian revolutionary, Jean-Jacques Dessalines – courageous, determined, valiant and resilient,” said Clarke, who represents the 9th Congressional District in Brooklyn.

“Therefore, it is befitting that the intersection of Newkirk and Rogers Avenues be co-named in his honour. This is one of many efforts, in which we, as a community, are paying homage to the many contributions Haitian-Americans have made, and continue to make, not only to our community in Brooklyn, but to the history of Black people around the globe,” she added.

Jean-Jacques Dessalines, who was born on September 20, 1758, became the first ruler of an independent Haiti.