"As a self-taught pannist, Ken “Professor” Philmore was able to command world stages, such as the Royal Ablert Hall London," said Trinidad and Tobago's Ministry of Community Development, Culture and the Arts, in a statement.

PORT OF SPAIN, Trinidad and Tobago, October 3, 2018 (CMC) – The Trinidad and Tobago government led the tribute to ace pannist, arranger and music composer, Ken “Professor” Philmore, who died at the San Fernando Hospital, south of here, yesterday, six days after he was involved in a vehicular accident.

Philmore, who was born 1959 in Trinidad, was nicknamed the “Professor” from a young child, because of the old-fashioned spectacles he wore.

“Through his music he did this country proud, wherever he played, bringing recognition not only to our country but to our beloved national instrument, the steelpan. He showed us that through dedication and love for the artform, it was possible to become one of the best,” Communications Minister, Stuart Young, said in a statement.

Philmore, 58, had been in the Intensive Care Unit (ICU) of the hospital, since last Monday, after he sustained serious injuries in the accident, when his vehicle overturned on the Solomon Hochoy Highway in Claxton Bay, south of here, last Monday – Republic Day. 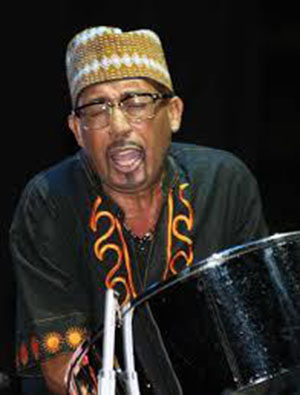 The Trinidad Express newspaper reported that the family had been informed, earlier, that there was no hope of recovery and doctors removed tubes from the life support machine, in the presence of family members.

The government statement said the pannist was “widely acknowledged as pan royalty in Trinidad and Tobago and was arguably one of the top steelpan soloists in the world”.

In 1996 he was honoured by Pan Trinbago as one of the most promising arrangers.

In 1988, Philmore appeared with Tina Turner and Lionel Hampton in New York, and also appeared in concert with the world-renowned Latin American musician, Tito Puente.

He also performed, as a special guest, with Mercer Ellington, son of “Duke” Ellington, and was featured on the title cut of Ellington’s album, “Queenie Pie Reggae”.

The president of Pan Trinbago, Keith Diaz, said the steel pan fraternity remains in shock at the death of the ace pannist, while the Mayor of San Fernando, Junia Regrello, said many people were still in a daze following the news.

“This is really a sad day. Anywhere you turn, people are asking, is it true?”.

“‘Professor’ will be remembered as a leading light of the steelpan community. As a self-taught pannist, he was able to command world stages, such as the Royal Ablert Hall London and played with world class musicians, such as Duke Ellington,” observed the Ministry of Community Development, Culture and the Arts, in a statement.

“He focused on excelling, both as a player and arranger. His passion and commitment to spreading steelpan music, across the world, should be an example to all young and aspiring pannists. We extend condolences to his beloved family, friends and colleagues. May he Rest In Peace,” the statement concluded.