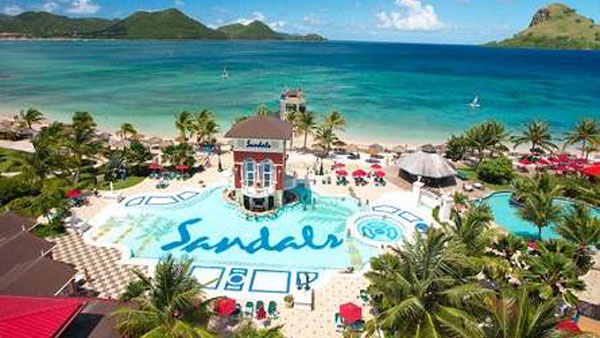 Jamaica-Based Sandals Resorts Denies Allegations Made On US Television

KINGSTON, Jamaica, December 18, 2018 (CMC) – Jamaica-based Sandals Resorts has categorically denied allegations that it is covering up allegations of sexual assault on two American female guests, insisting that it stands ready to “vigorously defend itself in court”.

In a statement, Sandals said “recent allegations of cover-ups by our organisation are false and are gross misrepresentations, of not only the facts but who we are and what we stand for, as a leader in the industry”.

“One of the core values of our company is exceeding guest expectations, and with that comes operating in full transparency. We are a family-operated enterprise that cares, deeply, about each and every guest we welcome into our resort home,” said the hotel chain.

The statement, by Sandals, follows a report, aired on the US-based ABC network, on Monday, on claims made by professional make-up artist, Melissa Blayton, and couple, Jeff and Ashley Pascarella.

Blayton, who was a guest at a Sandals property here, in 2017, said that one of the hotel’s employees, who offered her a solo sailing lesson, had sexually assaulted her. She told the American television station that after she was taken back to shore, on her demand, she spent the next few days holed up in her room, crying.

She said that the butler assigned to her room noticed her crying and advised her to talk to the hotel manager.

“There are many details missing from her story, including her interactions with resort team members, her requests regarding law enforcement involvement, and her subsequent requests of the resort, after her departure,” Sandals said in its statement.

“Further, it was surprising to hear about Ms Blayton’s allegations, since we have been in contact with her multiple times, over the last few months, and she has indicated plans for a return visit to Sandals Resorts in 2019. We look forward to having her back.”

In an interview on a radio program, here, on Monday night, Blayton said that she would “never, ever return to a Sandals resort”.

Blayton said she had received a voucher from Sandals, offering her a return visit, but she had “only one year” to use it.

Regarding the Pascarellas’ case, ABC reported that the couple, who had gone to a Sandals property, in the Bahamas, to get married in 2016, alleged that the butler, assigned to their room, sexually assaulted the bride, the night before her wedding.

“In reference to Mrs Pascarella, these allegations present a self-serving, one-sided and incomplete version of an incident, reported in 2016. The plaintiffs have unfortunately embarked to influence the case, based on their one-sided narrative in the media.

“Sandals intends to vigorously defend itself in court, against these one-sided allegations, and looks forward to presenting the full picture of all the facts and circumstances, surrounding this reported incident from 2016, within the appropriate legal forum,” Sandals said in its statement.

The attorney for the Pascarellas, John Nicholas Iannuzzi, said that his clients, who are seeking US$30 million, have filed legal action in the New York Supreme Court.

He said Sandals is in the process of being served.

“While no guest should ever experience what these women allege to have happened, the story on ABC’s Good Morning America, did not include important and pertinent information about both cases, much of which we can’t disclose, due to pending litigation,” Sandals said.

“Since our inception in 1981, we’ve had the distinct privilege of welcoming, well over 10 million valued guests, across our 24 resorts around the Caribbean. We are proud to lead the industry with the highest guest return rate of any resort company in the western hemisphere, and know that it has a direct relation to the safe and enjoyable environment that we have provided for over three decades.

“Our strict security protocols, infrastructure technology and collaboration with international law enforcement and government resources, ensure we are among the safest resorts operating in the Caribbean. We follow strict protocols and continue to evolve our policies,” it added.