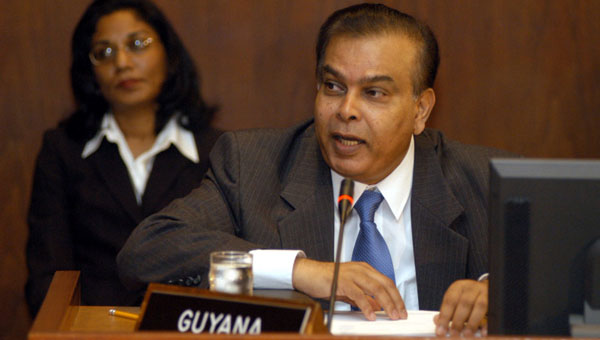 Ishmael was a recipient of the Cacique Crown of Honour — Guyana’s third highest national honour — for his outstanding work in diplomacy.

In a statement, late Saturday, President David Granger paid tribute to his work, noting his many contributions over the years.

The veteran career diplomat began his life as a teacher and subsequently authored several books, including the 1989 “Problems of the Transition of Education in the Third World”.

In 1992, Ishmael represented Guyana, at the meeting of Information Ministers of the Caribbean Community (CAROCOM) in Kingston, Jamaica, his first diplomatic representation.

From 1993 to 2003, he represented Guyana at the Organization of American States (OAS) in Washington, DC, where he served for two periods, as Chairman of the Permanent Council.

He was honoured with the Martin Luther King Legacy Award for International Service in Washington DC, in January 2002.

The following year, the US Congress, in a joint resolution, also paid a special tribute to Ishmael, just before he completed his service in the United States.

Ishmael, who retired from the diplomatic service in June 2014, leaves to mourn his widow, Evangeline Ishmael, son, Safraz, and daughter, Nadeeza.