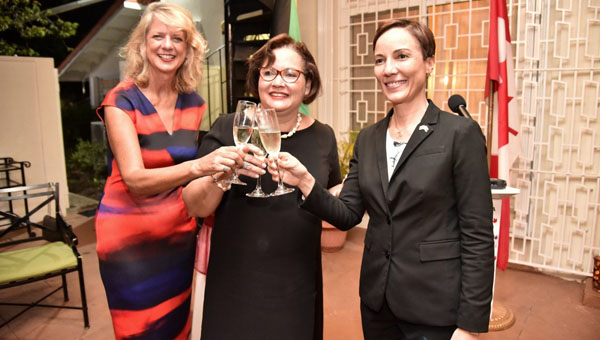 Jamaica's Minister of Foreign Affairs and Foreign Trade, Senator Kamina Johnson Smith (right), along with Canadian High Commissioner to Jamaica, Laurie Peters (left), celebrate the appointment of Jamaica-born Dr. Rosemary Moodie (centre), to the Canadian Senate. The occasion was a reception, held in honour of the new Senator, on January 16, at the official residence of the Canadian High Commissioner to Jamaica, in Kingston. Photo credit: Donald De La Haye.

Dr. Moodie, who has made significant contributions in healthcare and community service, in both Canada and Jamaica, was appointed to the Senate, on December 12, last year, by the Canadian Governor General, Julie Payette, on the advice of Prime Minister, Justin Trudeau.

A reception, in her honour, was held at the official residence of the High Commissioner of Canada to Jamaica, on January 16, in Kingston.

In her remarks, Minister of Foreign Affairs and Foreign Trade, Senator Kamina Johnson Smith, offered sincere congratulations on behalf of the government and people of Jamaica.

“We are indeed proud of your accomplishments and illustrious career, for which you were conferred with a National Award, the Commander of the Order of Distinction, for outstanding contribution to philanthropy, community development and medicine in the Jamaican Diaspora in Canada,” Senator Johnson Smith said.

She also highlighted Dr. Moodie’s involvement in reducing social inequities and health disparities among children and communities, locally and internationally.

“This is of particular relevance to us here in Jamaica. This is the rationale for our laser focus on implementing policies, geared towards the attainment of sustained and inclusive economic growth for the prosperity of all Jamaicans, where no one is left behind,” she stated.

Senator Johnson Smith also indicated that Dr. Moodie’s assent to the Senate of Canada offers a platform, where she can make an even greater impact on the Canadian society.

She added that her accomplishments are further excellent examples of the fact that Jamaicans excel in their spheres of influence in their adopted countries.

Former Prime Minister, P.J. Patterson, said the appointment is a “source of very great pride to us”, that another Jamaican has excelled in a country, with which Jamaica has had cordial relationships over the years.

“We are sure that she is going to bring to the discharge of her duties, an awareness of the concerns in the Caribbean and how we develop the partnership between the people of the Caribbean and Canada,” Patterson added.

For President of the Senate, Thomas Tavares-Finson, Dr. Moodie’s record of work in Canada and her “social activism”, have led to her elevation to the post.

“It is a remarkable achievement that all of us, especially those in the Senate here, celebrate with her,” Senator Tavares-Finson said.

President of the Private Sector Organisation of Jamaica (PSOJ), Howard Mitchell, says the group is extremely proud of the appointment.

He noted that Dr. Moodie’s influence of integrity, professionalism and a strong work ethic “is what we need to get out there in Canada to counteract, possibly, some of the more negative influences”.

Meanwhile, Medical Chief of Staff and Consultant Neurosurgeon at the University Hospital of the West Indies (UHWI), Dr. Carl Bruce, said he “has no doubt that she is going to do a tremendous job, and represent the people very well, in Canada”.

Mother of the newly appointed Senator, Gloria Moodie, noted that her daughter, as a child, executed tasks with careful attention to detail.

“I am sure that she will bring to that job, the same expertise, attention to detail and efficiency that has been her hallmark,” Mrs. Moodie said.

For her part, High Commissioner of Canada to Jamaica, Laurie Peters, noted that Dr. Moodie has been a “firm advocate” for women and girls.

She pointed out that in her capacity as President of the Young Women’s Christian Association (YWCA) in Toronto, Dr. Moodie spearheaded the completion of the city’s largest affordable housing project for low-income women with mental health needs and indigenous women and their families.

“As neonatologist at the Toronto Hospital for Sick Children, and as a Professor at the University of Toronto’s Department of Paediatrics, she has contributed to public policy changes that have reduced social inequities,” the High Commissioner stated.

In her response, Dr. Moodie lauded her husband, Peter Wong, for his continued guidance and support, and her mother, who has been an exceptional role model to her and her sisters.

She noted that her appointment is a declaration that Jamaicans will continue to excel, at home and overseas.

Dr. Moodie also noted that young people should “push your dreams, and don’t accept any barrier, because unless you test it; you don’t know what is possible”.

The Senate is the Upper House in Canada’s bicameral parliamentary democracy. It unites a diverse group of accomplished Canadians in service to their country.