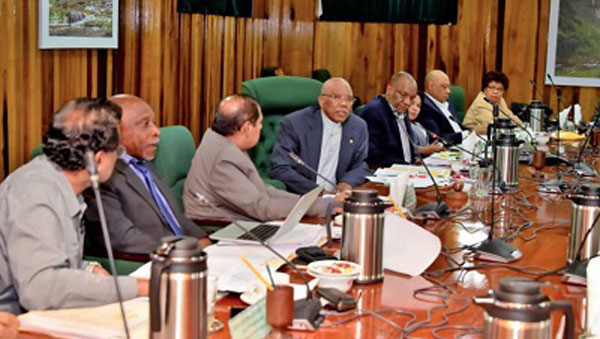 GEORGETOWN, Guyana, February 15, 2019 (CMC) – President, David Granger, met, today, with members of his Cabinet, in what has been referred to as a “plenary” session, as it sought not to contravene a High Court ruling that the motion of no confidence, passed by the National Assembly, last month, had effectively led to the downfall of his coalition government.

“There is a judgement of the Court that was made, with respect to the Cabinet, and that judgement is appealed, but we have not obtained a stay of the judgement as yet and, therefore, we have not held Cabinet meetings as such,”  Minister of State, Joseph Harmon, told a news conference.

He acknowledged that the “plenary”, which he described as “an extended Cabinet”, had taken place under Granger’s chairmanship, and that the weekly Cabinet meeting had not taken place, since Chief Justice Roxane George-Wiltshire’s ruled on December 21, last year, that the opposition-inspired motion of no confidence was valid.

“The plenary is all of the ministers. All of them attend the plenaries, and the plenaries are usually held, once per month, and Cabinet sessions are held every week, as you are aware,” Harmon said.

The main opposition People’s Progressive Party (PPP) has been calling on the Guyana Elections Commission (GECOM) to hold the regional and general election by March 19, in keeping with the Guyana Constitution that allowed for the polls to be held, within a 90-day period, when a motion of no confidence is successfully tabled in the National Assembly.

But GECOM has said that it cannot meet the deadline, and Opposition Leader, Bharrat Jagdeo, yesterday, said that the party would lobby the international community to blacklist the coalition government, if the polls are not held.

The government has since filed an appeal against the High Court ruling, and the Guyana Bar Association said, yesterday, that the filing of appeals and applications for orders, staying the operation of the clear timelines fixed by the Constitution, cannot stop the time from running, within which elections must be held.

Asked by reporters about the legality of the plenary sessions, conducting business similar to a Cabinet, Harmon responded by saying that it is the President, who appoints ministers, and they perform duties in various sectors as assistants to the President.

He said as a result, the President could convene meetings of those ministers to address and deal with issues.

“We have a government that is legal and functional and we have a President, who is the President of all of Guyana and we have a Government of Guyana. So, I don’t buy this question of running a risk. We have been elected by the people of this country,” Harmon said, insisting that the powers for the plenary session comes from the powers, invested in the President, as Head of State and of Government.

Harmon said the Constitution provides for the elections to be held within three months of the National Assembly’s approval of the no-confidence motion or an extension to be approved by two-thirds of the House.

“There has been no stay on aspects of the government – that is the Cabinet, but the government is still there. The government functions,” Harmon said, adding that President Granger is prepared to hold talks with Jagdeo on any issue of national importance.

The Opposition Leader told a news conference, yesterday, that he was not seeking a meeting with Granger.

“I am not seeking any meeting. He needs to comply with the Constitution. We have a President who is driving us into a constitutional crisis,” he said.

But Harmon told reporters that Jagdeo has been making a number of “crazy” statements, reminding reporters that the last time the two leaders met, it was on the request of the Opposition Leader.