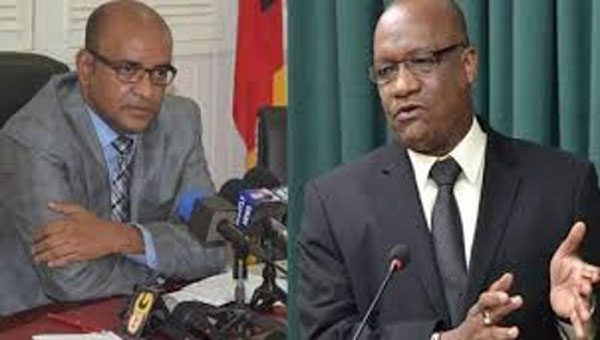 Guyana Government And Opposition In War Of Words

GEORGETOWN, Guyana, March 1, 2019 (CMC) – The Guyana government and the main opposition People’s Progressive Party (PPP) are engaged in a war of words, after the coalition administration said the PPP’s General Secretary, Bharrat Jagdeo, had accused President David Granger of fraudulent behaviour, through the issuance of two separate letters to the Chairman of the Guyana Elections Commission (GECOM).

Minister of State, Joseph Harmon, last night, said that Jagdeo had descended to a new level of disrespect for the Office of the President and the government, by maligning the good character of the President and his office, and by “deliberately, maliciously misleading” the public.

Jagdeo, speaking at a news conference, yesterday, said Granger had sent one letter to the GECOM chairman, retired Justice James Patterson, and releasing a different letter to the public.

“He has to say why he issued two (letters) to the Chairman of GECOM, which contradict each other,” said Jagdeo.

“I don’t think we can even move forward as a country, if you have a government operating fraudulently. I shared with you the two letters and how they have been altered….. you will see the huge difference. When this country thought that we were moving forward, the second letter takes us back to the old argument. I would not have seen this, had I not asked my staff to print out what is on their website…..” Jagdeo said.

But Harmon noted that President Granger had received Justice Patterson’s letter on Monday, hours before he departed for medical treatment in Cuba.

He responded promptly in his first letter, which states in its opening paragraph, “Dear Chairman, I acknowledge receipt of your letter, dated 2019.02.21. I have noted your statement to the effect that the Commission does not have the capability to deliver credible General and Regional Elections (GRE) within the three-month time frame commencing 2018.12.21 and that additional funds, appropriated by the National Assembly, need to be provided,” Harmon said,

He said in that same letter, the President also assured the Commission that the government is committed to doing whatever is needed to ensure that it is provided with the financial resources and has enough time to conduct credible elections.

Harmon said that in the second letter, the President begins by stating, “Dear Chairman, I wrote you earlier acknowledging receipt of your letter dated 2019.02.21 and the documents enclosed. I have noted the requirements stated by the Guyana Elections Commission herein, for the preparation and delivery of General and Regional Elections in 2019.

Harmon said that the second letter refers to the need to consult because the Chairman of GECOM raised issues of time and the lack of financial resources. It was aimed at finding out the amount of money needed to conduct credible elections.

He insisted that the first letter was not doctored.

“So there are two letters. The first letter is an acknowledgement of the Chairman of GECOM’s letter. The second letter refers to the first letter. So how could you now say that this is something that is doctored when you, the author of the letter, acknowledges that you sent one and this is the second one I am sending?” Harmon said, adding that he is appalled by the allegation against Granger and the attack on his religion by Jagdeo.

““I have never heard anyone level such an accusation against President David Arthur Granger, a Christian man, who espouses and practices Christian values, who understands the Bible and while this gentleman today has been talking about the Bible.

“Now this is what the Leader of the Opposition is seeking to say, that the President did after two letters were released that were addressed to the Chairman of GECOM, not to Mr. Jagdeo. We have not heard the Chairman say that he felt deceived or that there was any misrepresentation in what the President said,” Harmon said.

Harmon said that at no time has the President or any member of his government “stooped to the level of disrespect that is demonstrated by the Leader of the Opposition and his actions and utterances must therefore be condemned.

“The Leader of the Opposition should avail himself to sound advice and respond in a manner that is befitting the office and not to go about running people down, berating them, berating the high office of the President. The President has never descended to that level to describe Mr. Jagdeo or anybody in that way that he is now seeking to describe the President with disrespect.

“This is something that not only the Government will take very seriously, but all Christians, all people of religion across the world must recognise that this is an attack on the religion of the President, an attack on order and good governance and he must be condemned in the strongest possible terms for this level, to which he has sunk in this press conference.

“I am also calling on all right-thinking Guyanese to condemn the Leader of the Opposition for this level, to which he has sunk, and for which he is trying to take the society, into the pit to which he has descended,” Harmon added.

Jagdeo has said he would not meet with President Granger next Wednesday until a date for a general election is announced.

“Unless there is a time for election on the agenda, there will be no meeting. There is no merit to meet on the two issues that he has asked me to meet on because they are provided for in the Constitution of Guyana. I do have a choice. We will not at this stage vote to extend the life of this government,” Jagdeo said.