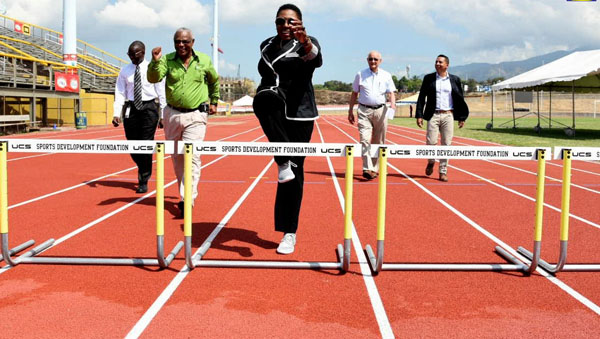 Minister of Culture, Gender, Entertainment and Sport, Olivia Grange (centre), attempts to clear a hurdle at the new East Track at the National Stadium in St. Andrew on Monday (March 25). Others (from left) are Permanent Secretary in the Ministry, Denzil Thorpe; General Manager at Independence Park Limited (IPL), Major Desmon Brown; Chairman of IPL, Mike Fennell, and Deputy Chairman, David Shirley. The occasion was the official opening of the new track, which was developed at a cost of $71.5 million. Photo credit: Michael Sloley/JIS.

ST. ANDREW, Jamaica March 27, 2019 — The Jamaican government is undertaking a $12-million pilot project, aimed at expanding participation in the track and field discipline of hurdling, among student-athletes. The project will target athletes in 25 secondary institutions, across the island.

Making the disclosure, Minister of Culture, Gender, Entertainment and Sport, Olivia Grange, said that the Sport Development Foundation (SDF), in its development plan, has indicated that involvement in hurdles is not widespread.

Noting that only a minority of schools enter students for the discipline at the annual ISSA/Grace Kennedy Boys’ and Girls’ Championships, she said that with greater participation, Jamaica can be more dominant in the area in the international arena.

Minister Grange was delivering the keynote address at the official opening of the East Track at the National Stadium, in St. Andrew, on Monday. 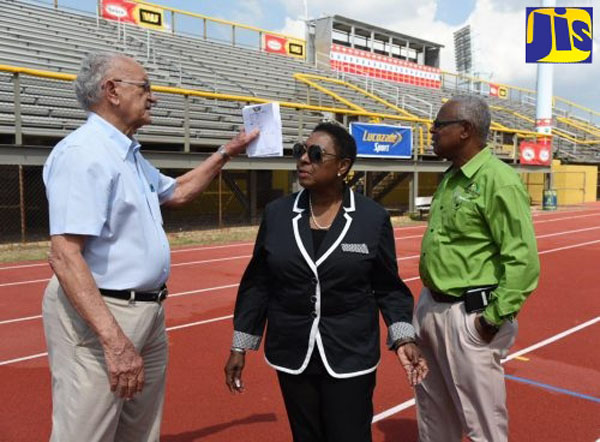 Sport Minister Grange (centre), is in discussion with Chairman of Independence Park Limited (IPL), Mike Fennell (left), at the official opening of the new $71.5-million East Track at the National Stadium in St. Andrew, on March 25. At right is General Manager at IPL, Major Desmon Brown.

She said the cost of supplying the neediest schools, with at least two flights of hurdles, is being explored, as this is the minimum required to develop competitiveness.

The SDF is gathering data to ascertain, from the athletic fraternity, ways in which the initiative can be implemented. This consultation will ensure that the most appropriate hurdles are selected for training purposes.

Grange said that a “fair system” will be designed to select schools for receipt of assistance, noting that the Ministry will ensure that the technical capacity at the institutions exists, as well as the necessary infrastructure.

The new track at the National Stadium was completed at a cost of $71.5 million. 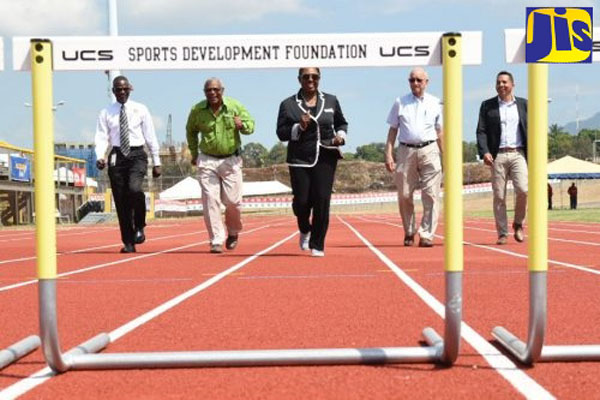 Minister Grange said the investment in sports infrastructure is part of a strategy to provide the enabling environment for Jamaica’s athletes to achieve global success.

“The government is strategising and initiating development. We are sowing the seeds of development in sport, based on the firm belief that we have to be more strategic, more focused, in order to maximise the vast potential that sport can have on our citizenry,” she said.

She noted that the objective is to improve lives, grow the economy, and ensure that development takes place, at all levels, with “sport as the engine that drives that development”.