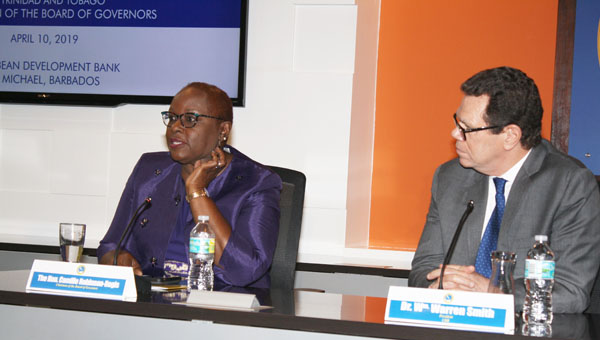 Trinidad and Tobago’s Minister of Planning and Development and Chairman of the Caribbean Development Bank's Board of Governors, Camille Robinson-Regis (left) answering a question from Bank staff, during her visit at the Bank’s headquarters on Wednesday, April 10, 2019, as CDB President, Dr. William Warren Smith, listens on. Photo credit: CDB.

BRIDGETOWN, Barbados, April 12, 2019 (CMC) – The Chair of the Board of Governors of the Caribbean Development Bank (CDB), Camille Robinson-Regis, says the regional institution must continue to evolve, even on the completion of its ongoing transformation, in order to respond, effectively, to the changing needs of the region.

Robinson-Regis, who is Trinidad and Tobago’s Minister of Planning and Development, made the statement, while addressing staff, during her official visit to the bank, on Wednesday.

“I would like to be certain that the Bank remains dynamic and relevant. I know that you have in your arsenal, a transformation that you’re going to be following through with. But I wouldn’t like it to just be a transformation, that gets to a point and then stops. It must be something that is continuing to evolve,” she stated.

Her visit comes, ahead of the 49th Annual Meeting of CDB’s Board of Governors, which Trinidad and Tobago is hosting, in June.

While at the Bank, the Chair also met with CDB President, Dr. Warren Smith, and the senior management team.

The Chair emphasised the long-standing and deep-rooted relationship between CDB and her country, which is a founding member of the Bank and one of its largest shareholders.

In his remarks, Smith also highlighted the pivotal role, which Trinidad and Tobago played in the Bank’s formative years.

“…. Trinidad and Tobago helped to finance the early work of our institution, and so, we feel a very strong sense of respect for, and indebtedness to, that shareholder country,” he said.

Robinson-Regis pointed to the Bank’s connectedness to the region as a key strength. She traced her own deep connection to CDB to her father, Charles Robinson, who was a staff member, when William G. Demas was President of the CDB.

“The Bank …. is one of those institutions like UWI … that means something special to the people of the region …. even though we have relationships with other development institutions, …. CDB is the Bank that really reflects us, most closely, and knows what we need,” she added.

The June meeting will mark the fifth time that Trinidad and Tobago has hosted CDB’s Annual Meeting.