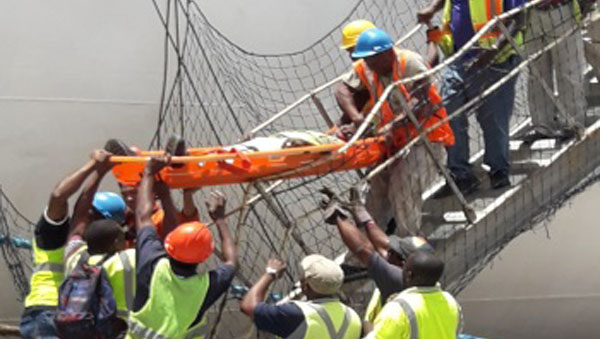 Body of stevedore being removed from vessel. Photo credit: CMC.

Dock Worker Killed In Accident At Port In St. Lucia

CASTRIES, St. Lucia, April 12, 2019 (CMC) – The St. Lucia Air and Sea Ports Authority (SLASPA) confirmed, today, that a stevedore had died, yesterday, following an accident on board a ship, berthed at the Castries Seaport.

It said that Wilson A. Joseph, who had been employed by Winfresh, to load bananas on the MV Baltis Klipper, died at the Victoria Hospital, following the incident.

“The Authority is saddened by the turn of events, as this is the first time in our 36-year history that such an incident has occurred at our ports. SLASPA extends sympathies to the family of Mr. Joseph and the staff of Winfresh. SLASPA will provide further updates about this incident, as soon as it becomes available,” it said in a statement.

SALSPA gave no details of the incident, but said that operations were suspended, “immediately, following the incident, to ensure the safety of port users”.

It said that the matter has been handed over to the Crime Investigations Department (CID) of the Royal St. Lucia Police Force and the Port Police Department; and that the vessel and local agents are assisting with the investigations.

Media reports, here, said that Joseph died, after he was squeezed by a container, on board the Liberia-registered vessel.