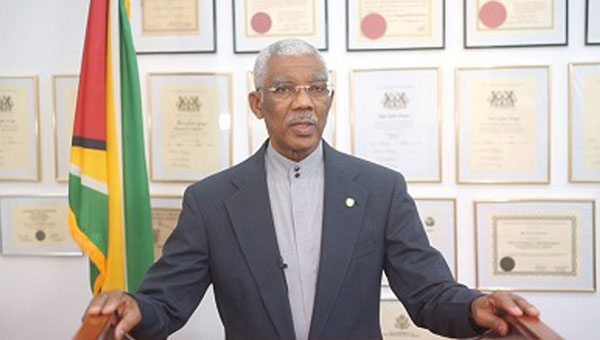 GEORGETOWN, Guyana, July 12, 2019 (CMC) – President David Granger said, today, while it is clear that elections must be held in the “shortest possible time”, he insists nonetheless that the polls must be credible, including the provisions of a new voters list.

In a radio and television broadcast, after the consequential declarations by the Trinidad and Tobago-based Caribbean Court of Justice (CCJ) — following last month’s ruling that the motion of no-confidence against the government was valid as well as the appointment of the GECOM chairman, late last year, was flawed — Granger said that the constitution of the country remains “sacrosanct and supreme”.

“The independence of the judiciary remains intact and the Elections Commission remains independent,” he said.

The Caribbean Court of Justice has now concluded its deliberations and has issued its consequential orders on the consolidated cases, related to the appointment of the Chairman of the Guyana Elections Commission and the passage of the no-confidence motion, Granger said, adding that the CCJ has “noted that, of the greatest public importance, the President and the Leader of the Opposition should conclude the process of appointing a new GECOM chairman”.

He said CCJ President, Justice Adrian Saunders, said that this is imperative and of utmost urgency.

“I agree. I have committed since 21st December 2018 to the holding of free and fair elections,” Granger said, noting “credible elections are essential to a representative democracy.

Granger spoke of the efforts by his administration and the representatives of the Opposition Leader, Bharrat Jagdeo, to deal with the process of selecting candidates for the position of GECOM Chairman.

“It was my hope that the two sides would have been able to “hammer out” the list of six nominees, in accordance with the CCJ guidelines.

“It is unfortunate that, despite the meetings between the two sides, the Leader of the Opposition rejected the idea of acting in a consensual manner. He chose to put forward candidates for the post, who have been rejected previously,” Granger said in his broadcast.

He elaborated, “it is clear that elections have to be held in the shortest possible time and, therefore, it is crucial to appoint a chairman of the Elections Commission. This could be done as early as Monday if the Opposition is prepared to act in a consensual manner and in good faith.

“GECOM and not the Executive is in charge of the elections. GECOM has to advise the President on its readiness to conduct elections. I commit to the holding of credible elections in the shortest possible time,” the President said.

President Granger said that he would devote “all my energies until the forthcoming election to serving our people and our country and to delivering good governance.

“We live in a country that is moving forward; with an economy that is more resilient – providing better jobs; communities that are safer; in a society that has better infrastructure, greater access to quality education and that is more cohesive.”

He said he was urging “all our people, of whatever background when the election comes, to back myself and the coalition to secure a better future for Guyana”.

The CCJ, today, ruled that it cannot “establish a date on or by which elections must be held” here, ruling also that it could “not lay down timelines and deadlines that, in principle, are the preserves of political actors guided by constitutional imperatives”.

CCJ President, Justice Adrian Saunders said that the CCJ must assume that “these bodies and personages will exercise their responsibilities with integrity, and in keeping with the unambiguous provisions of the Constitution, bearing in mind that the no-confidence motion was validly passed, as long ago as 21st December 2018”.

Under the Guyana Constitution, elections must be held, within a 90-day period, following the passage of a no-confidence motion in the parliament or unless extended by the legislative body.