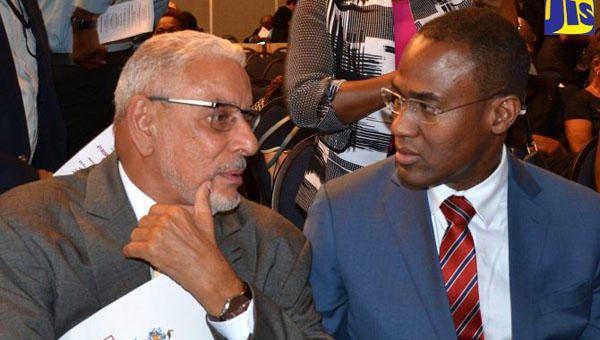 Finance and the Public Service Minister, Dr. Nigel Clarke (right), in dialogue with Mona School of Business and Management (MSBM) Executive in Residence, James Moss-Solomon, during the opening ceremony for the MSBM's three-day business and management conference, at The Jamaica Pegasus hotel in New Kingston, on Wednesday. Photo credit: Mark Bell/JIS.

NEW KINGSTON, Jamaica July 12, 2019 — The Jamaica government is in discussions with the Inter-American Development Bank (IDB) for the provision of technical support in building Jamaica’s capacity to commercialise research, done by local tertiary institutions.

Finance and Public Service Minister, Dr. Nigel Clarke, said that the move is aimed at facilitating innovation in driving entrepreneurship.

He was addressing the opening ceremony for the Mona School of Business and Management’s (MSBM) fourth business and management conference at The Jamaica Pegasus hotel in New Kingston on Wednesday.

Twenty-five global patents have been generated by the University of the West Indies (UWI), 20 of which are housed at the Mona Campus in St. Andrew, where the MSBM is located.

Dr. Clarke noted that there is a “great degree of innovation” evolving from academic institutions in countries where entrepreneurship thrives, citing England’s Cambridge University as an example.

He said the university’s work, over the past 30 years, has resulted in the formation of 4,600 companies, which employ approximately 60,000 persons.

The Minister said the research emerging from Cambridge University, including drugs for cancer treatment and digital applications, “has found its way into several multibillion-dollar companies”, 16 of which have market capitalisation of US$1 billion.

He noted that one company involved in gene sequencing, which was sold to an American entity for US$640 million, has generated market capitalisation totalling US$52 billion.

“That is what becomes possible when you focus on entrepreneurship at a university…. that has to be the vision for Jamaica… and it certainly is possible,” he contended.

He noted that while research is imperative, commercialisation “is an element that we need to work on if we are to realise our potential”.

Dr. Clarke expressed the hope that the outcome of the IDB engagement “is something that… before long… we can launch”.

The three-day business and management conference was held, from July 10 to 12, under the theme “Delivering on the Promise of Entrepreneurship: Critical Perspectives on Research, Practice and Thinking in the Fourth Economy”.