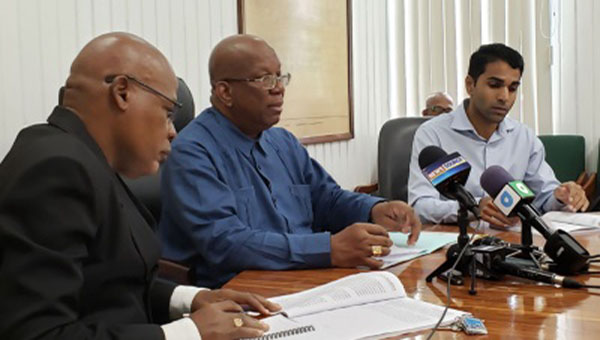 GEORGETOWN, Guyana, August 14, 2019 (CMC) – The Guyana government is predicting a 4.5 percent growth of the local economy, after recording a four percent increase for the first six months of the year.

“We expect 4.5 percent growth at the end of this year, but of course everything has an if and a but. And you know there are downside risks that can challenge us getting there, one of which is the challenging political environment that has been there since December 2018. In a sense, it accelerated because since 2015, we have been operating in a challenging environment,” Finance Minister Winston Jordan said, as he presented the 2019 mid-year economic report.

Jordon told reporters that the improved performance was fuelled by growth in a number of sectors, such as rice, forestry, gold, manufacturing, construction, wholesale and retail trade and financial and insurance activities.

But he acknowledged that the economy could have been performing much better, had it not been for the problems with the bauxite industry and the current weather conditions, which have impacted the agricultural and mining sectors.

“Investments by both businesses and households continue to trend upward, evidenced by a 5.7 percent increase in private sector credit. That was driven by significant increases in real estate mortgages, as well as loans to business enterprises and individuals,” the report notes.

The Finance Minister brushed aside complaints from the Private Sector Commission (PSC) and the Georgetown Chamber of Commerce (GCC) about a “slow down” in the economy, as a result of the ongoing political situation in the Caribbean Community (CARICOM) country.

“Until people bring credible evidence, which is the Bank of Guyana report, or the IMF report, or ECLAC, or something showing that there is a downturn, then there will just be statements, and as far as I am concerned, there are irresponsible statements…

“Every meeting with the private sector, I said bring me the evidence, but that is where it ends, I don’t get it,” he added.

Jordan said that the political situation, including threats to review deals, has posed a setback in the sale of several of the financially-troubled Guyana Sugar Corporation (GUYSUCO) estates.

“The sale of the estates has been delayed, partly due to the political side, because nobody is expressing interest when the opposition  says ‘we are going to review sales’ and so on, and that happened in the past too, where people pulled out.

“They don’t express interest in an atmosphere of uncertainty, where you’re suggesting this review, which is another word for harassment, will take place, so that has not gone down too well,” he said

The main opposition People’s Progressive Party-Civic (PPP-C), which has been calling for fresh regional and general elections, here, by September 18, has promised to reopen the estates and provide employment to thousands of workers, who have been displaced as a result of the restructuring exercise.

The Trinidad and Tobago-based Caribbean Court of Justice (CCJ), last month, labelled the present administration as a “caretaker” government, pending the outcome of the elections, and Jordon said there will be no budget presentation until after the polls.

But he said the government will activate the provision that allows it to spend one-twelfth of the previous year’s budget, if there are no elections when the budget expires at the end of December.