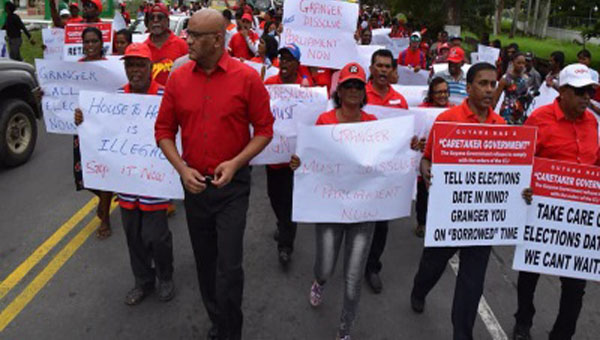 GEORGETOWN, Guyana, August 14, 2019 (CMC) – Supporters of the main opposition People’s Progressive Party-Civic (PPP-C) took to the streets, yesterday, armed with placards and chanting “set a date now” and “no house to house”, and gathered outside the Ministry of the Presidency, demanding that President, David Granger, name a date for the general elections.

Granger has already said he will await word from GECOM to guide his decision to name the date, but the PPP-C, which in the past has been calling for a September 18 election date, wants him to do “so now”.

PPP-C Presidential Candidate, Irfaan Ali, told reporters that President Granger needs to dissolve the Parliament and call elections, even as Granger and opposition leader, Bharrat Jagdeo, are due to meet on Thursday.

Ali said that the PPP-C is ready for the elections and is also confident of victory.

Attorney General and Minister of Legal Affairs, Senior Counsel Basil Williams, had argued, Monday, that GECOM had not violated any law by moving ahead with the registration exercise and therefore it should continue.

But in a statement, last week, in which it accused Williams of seeking to incite post-election violence, the PPP-C said that “the ongoing legal challenge to house-to-house registration…is likely to end up before the Caribbean Court of Justice”.