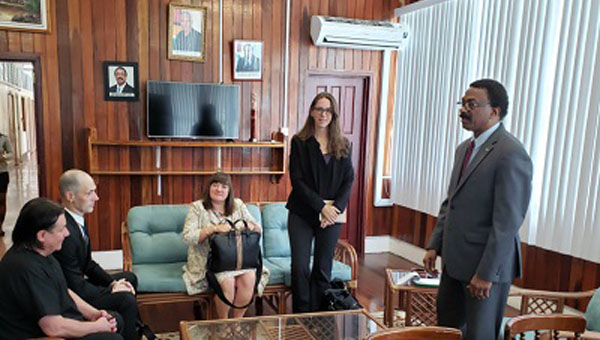 US-Based Carter Centre Officials On A Visit To Guyana

GEORGETOWN, Guyana, September 11, 2019 (CMC) – Four officials from the Atlanta-based, Carter Centre, have held talks with Attorney General, Basil Williams, regarding the ongoing preparations for the regional and general election in the country.

“We were happy to have the opportunity to meet with the Attorney General, and to hear from him about the laws of Guyana and his various arguments, related to the current circumstances in Guyana…And I can say, from the Carter Centre, that we are really here to listen and we are hoping to meet with different actors to understand everyone’s perspective on current events in Guyana,” said Brett Lacy, Head of the delegation.

Williams, speaking to reporters following the meeting with the delegation, said that he had been able to point out the concerns about persons, who may now be resident outside of Guyana, still having their names on the voter’s list.

He said he explained that a recent ruling by the Chief Justice, indicating that there could be no removal of persons from the national register although they are no longer resident in Guyana, may open the door to overseas voting, and that is not allowed under the laws of Guyana, unless the person works at a Guyana embassy or mission abroad.

Williams said it was for this reason, why the David Granger government has appealed that ruling, adding that the coalition administration is prepared for elections, and President Granger has repeatedly stated that once GECOM has indicated its readiness, he will name the date

The delegation is also expected to meet with officials from the Guyana Elections Commission (GECOM) before its departure.