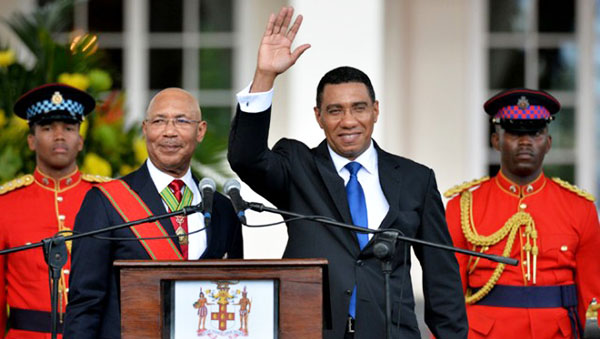 Andrew Michael Holness Sworn In As Prime Minister Of Jamaica

Holness, who was sworn in shortly after 4pm (local) time, promised to build partnerships to help Jamaica become the “center of the Caribbean.”

The new Prime Minister, in noting that the people of Jamaica did not vote in vain, said, “they expect a government that works for them and, by the same expectation, an Opposition that is constructive. This historic election delivered the smallest majority but also the clearest mandate: Fix Government!”

“We cannot be satisfied with things as they are. My dream is to fulfill your dreams,” Holness said, during his inaugural address.

Holness, 43, called on Jamaicans, at home and in the Diaspora, to join him in taking the debt-ridden nation to economic prosperity.

“We will ensure that it is easy for the Diaspora to participate in the development of their homeland,” he said.

According to Holness, in his vision of shared prosperity through inclusive economic growth and meaningful job creation, “now more than ever, Government must lead, activate, empower and build real partnerships. I intend to lead a Government of partnership. The solutions to our problems do not rest with Government alone.”

He noted, that partnerships “require trust, clear assignment of responsibility and an elevated sense of duty.”

“There is only so much trust that pledges and statements of commitment can buy. I understand that the Jamaican people now want to see action in building trust. This is part of fixing government. Everyone who will form the next government must be seized of this expectation. From the politician making policy, to the civil servant processing an application, we must act dutifully to fulfill our responsibility.”

Holness also promised to partner with the private sector to ensure growth.

“The priority of this Government is to grow the economy and create meaningful jobs. In so doing, we will more rapidly and sustainably reduce debt. I am sure we all agree that much of Jamaica’s development has been achieved without growth, which has left us with much debt.”

“This is unsustainable. Going forward Jamaica’s development must rest on its ability to create propositions of value and attract investments to convert the value into wealth.”

He added that, “In this model, Government is not the main investor, it is the Private Sector, whether they be large enterprises or small business.”

He also called on the private sector, to unleash investments in the local economy.

“We want to see the return of the pioneering drive to create new industries, the entrepreneurial willingness to take risk, and the innovative insight to do things better,” adding, that he is heartened by the signals coming from the private sector. “I believe they have got the message about the partnership for growth and job creation. Now is the time for growth.”

“A centre of finance, trade and commerce, technology and innovation, and the centre of arts, culture, and lifestyle regionally. This is all possible within our lifetime. Despite any negatives, Jamaica still has a powerful and alluring brand amplifying our voice and influence in the world,” he added. 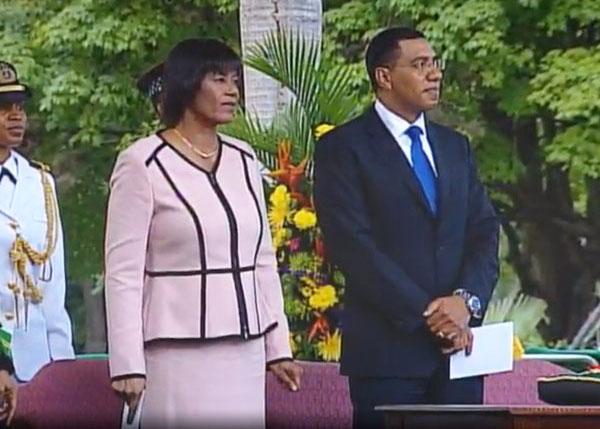 Handing over: Andrew Holness and Portia Simpson Miller, at the G-G House grounds before the swearing-in ceremony.

“I believe the mandate is saying, we may not be on the same side of the road, but as much as possible, we should hold hands in cooperation to overcome obstacles for the good of the country.”

“We have evolved without formal structure a very good partnership in education and we intend to continue our informal collaborations in this area, and pursue other such areas of cooperation between Government and Opposition members.

I still believe it is a useful symbol of national unity for the Prime Minister and the Leader of the Opposition to appear together in zones of political exclusions. I again extend the invitation.” 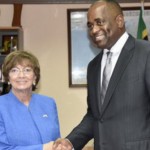