New in Pride
Home / National News / “Those who cannot remember the past are condemned to repeat it.” — George Santayana, The Life of Reason (1905-06) 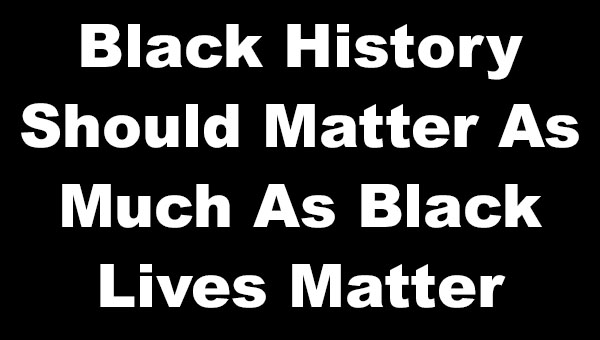 Black history, in its general and broadest sense, refers to the stories, experiences and accomplishments of people of African origin.

The origins of Black History Month lay in early 20th-century historian Carter G. Woodson’s desire to spotlight the accomplishments of African-Americans. Mainstream historians left out African-Americans from the narrative of American history, up until the 1960s, and Woodson worked his entire career to correct this blinding oversight.

When Negro History Week turned into Black History Month in 1976, the celebrations, during the second week of February, expanded to the entire month of February.

On July 13, 2013, in response to the acquittal of George Zimmerman for the murder of Trayvon Martin, three radical Black organizers — Alicia Garza, Patrisse Cullors and Opal Tometti became the initiators of a Black-centered political will and movement-building, called Black Lives Matter — an ideological and political intervention in a world, where Black lives are systematically and intentionally targeted for demise.

On October 2014, Janaya Khan, and Yusra Ali founded Black Lives Matter-Toronto, following the killing of 33-year-old Jermaine Carby, who was shot and killed, after the car he was in was pulled over, near Kennedy Road, North, and Queen Street, East, around 10 p.m. on Sept. 24, 2014.

Here we are, in 2020, and the issue of Black History is in need, still, of a movement to make it matter. Educators only teach lessons on Black history and tiptoe around hard race-related issues, from February 1 to February 28 or 29. History is still being taught, without full cognizance of the Black presence.

For the most part, students, from Grade K-11, learning about Black History are hearing, over and over, about the same historical figures, such as Nelson Mandela, Martin Luther King, Jean Augustine, Ann Cools, Lincoln Alexander, Barack Obama and Harriet Tubman. While these lives are, undoubtedly, worthy of study, they do not exist in a vacuum.

There is a call to action that Black History be a high school graduation requirement, in similar manner as History and Citizenship Education is. Black History does matter.

Currently, there are many Black students, who know about the Black Lives Matter movement, except that it has not been woven into Canadian history, so the students are at a loss to figure out how does the movement connect to what happened at an earlier time. Current events and increased social media usage have piqued students’ interest.

This current moment in time, can be seen as a watershed moment for Black history as a discipline, in similar manner that just as a moment of decision for African-Americans fueled Carver Woodson’s original vision.

Black History Matters, for while the condition of the teaching of Black history in schools may be steadily improving, yet it remains stagnant.

One of the problems with getting Black history right, is that Blacks are still laboring under the belief that Black history is Canadian history. All fine and dandy, but such a belief is fraught with problems, as it often is when Canadian history has been taught, or is being taught, as a story in which other ethnicities have improved our nation.

Furthermore, the problem with that perspective can be seen, for example, where Black history narrative ends in many schools. Ironically, it does not end at the same place, but on the same date February 28 or 29.

In addition, Black stories often end up told through a white lens, and the first time that Black people enter the school curriculum is through the time when they are enslaved. Being in such a state gives the impression that these particular set of people were not that important to Canadian democracy and did not contribute to the intellectual development of the country.

Paradoxically, while slavery and the civil rights movement may be the most recognizable Black history subject areas, the quality of what students are learning about these topics has come into question, recently. Students have reported that the history has been sanitized, and a lack of sufficient discussion about the hard realities of slavery and the treatment Blacks endured in attempting to gain freedom.

The hashtag Black History Month Matters movement needs to be set in motion. It is imperative that educators become more knowledgeable, and better equipped, to teach the subject all year round. If not, it merely reinforces the elemental flaw, which is that Black history is seen as peripheral or inessential.

The response to why do white kids need Black history is that it is history, and it’s their history too. It is a shared collective past. Confining Black history lessons to February, as many schools do, is “the exact opposite” of what Woodson envisioned. Enough of the Natter—Black History Matter.