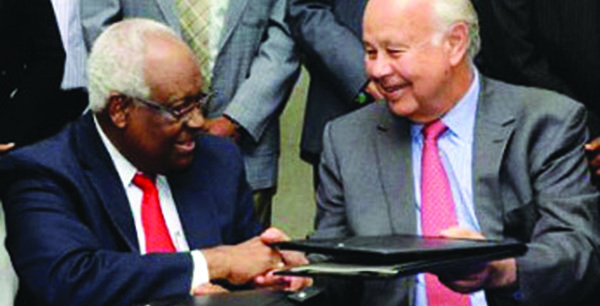 KINGSTON, Jamaica, CMC — Two of the oldest media houses in Jamaica, the RJR Communications Group and the Gleaner Company, will be merging their operations to create the largest multimedia entity in the region.

The boards of the 180-year-old Gleaner Company and the 65-year-old Radio Jamaica, last week Wednesday, approved the merger of both entities.

The transaction, which is to be pursued through a court approved scheme of amalgamation, will be a stock for stock deal where Radio Jamaica Limited will issue and exchange 1.2 billion shares, on a one for one basis to shareholders of The Gleaner Company Limited, for 100 per cent of a newly formed subsidiary Gleaner Company (Media) Limited (GCML), which will hold the assets of the media entities of the Gleaner Company.

At a press conference, last week Wednesday, Chairman of the Gleaner Company, Oliver Clarke, said the merger will create a vibrant and strong Jamaican-owned media operation.

“Our newspapers will continue publication using existing names. Both companies will call General Meetings when so instructed by the court, to seek approval from their respective shareholders for the merger. When the merger is completed, in a few months’ time, each Gleaner shareholder will receive one RJR share for every Gleaner share owned, and will continue to own their Gleaner share.”

The existing Gleaner Company will continue to operate with its non-media assets, under a new name, and with its existing shareholders.

“This is the most exciting development for media in over 50 years. The combination of RJR’s and the Gleaner’s leadership in print and electronic media, our track record of credibility, our commitment to high journalistic standards and excellent customer service are outstanding positives for stakeholders in both companies,” said Gary Allen, Managing Director, Radio Jamaica Limited,

“The companies have been the leaders in all of the industry’s most important innovations in media, over the last 180 years, and this merger will accelerate the pace of that innovation, to deliver superior products and services within the highly competitive and dynamic marketplace, in which we operate”, Allen added.

“This combination creates a stronger company that delivers maximum value for our shareholders, greater career opportunities for our employees, and superior experience for our customers,” said Christopher Barnes, Managing Director of Gleaner Company Limited. ”Both management teams have built industry-leading suites of products and services, and we’re excited to be part of delivering all of the possibilities to Jamaican consumers,” He added.

The expanded media group, which will be renamed once the transaction is complete, is to be led by Chief Executive Officer, Gary Allen, with Christopher

Barnes as Chief Operating Officer. J.A. Lester Spaulding is to be Chairman with Oliver Clarke as Deputy Chairman.