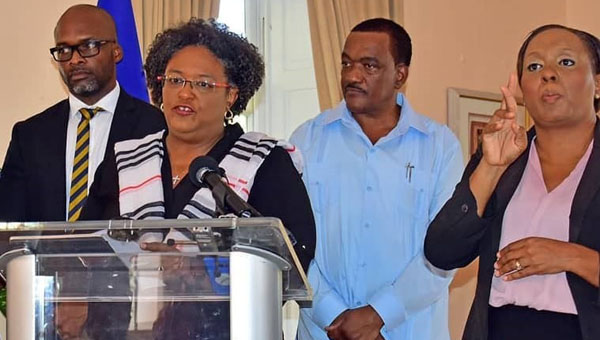 BRIDGETOWN, Barbados, March 20, 2020 (CMC) – Barbados announced three more cases of the coronavirus (COVID-19), yesterday, reiterating that it has no intention of completely shutting down its borders, as it comes to grips with the virus that has been blamed for more than 8,000 deaths, across the globe.

Prime Minister, Mia Mottley, flanked by government ministers, as well as senior health officials, told a news conference that as on the previous occasions, none of the new cases originated on the island, including a passenger on a cruise ship.

Mottley said that the first of the new cases was the spouse of a visiting female, who was one of the first two people to be tested and found positive, two days ago.

“The gentleman, I am told, never left her side and was in isolation with her, even when she went into isolation, as soon as the testing was done. It is, therefore, no surprise to the medical officials that he has tested positive,” the Prime Minister observed.

She said that the second new case is that of a 60-year-old Barbadian, who arrived, here, from the United States, on the weekend, and “who developed symptoms, soon after arriving in Barbados”.

“We have been monitoring him for a few days, and he also has tested positive,” she said, noting that the third individual was a passenger on a cruise line, who had never visited the island, and the testing was done at the request of the un-named cruise line.

She said, with respect to the first two new cases, “there is a significant amount of contact-tracing that is still being done…and it is too early for the medical officials to advise us as to the results”.

“With respect to the cruise ship, this morning I gave instructions that there should be no shore leave…and I also gave instructions that we will continue to facilitate the persons, who are disembarking the ships, to go to the Grantley Adams International Airport only, in order to be able to take their flights out.”

Mottley said the last flight out, will be on Sunday, and that the crew will not be allowed to go ashore.

“We have an obligation to these ships. These ships call Barbados home and that there is a legal and contractual and moral and ethical and humanitarian obligation that we have. I will say to you, that we did receive a request, last week, with respect to being able to test four or five or six cases on board one ship, and we refused.”

Mottley said her administration had also taken the decision “that any persons, arriving from the USA, from the United Kingdom or Europe, will have to quarantine, or self-quarantine if they are Barbadian, for 14 days, going forward”.

She said discussions were held, earlier yeterday, with US-based airlines, including JetBlue, American Airlines “and in both instances, we indicated…this quarantine and self-quarantine will be for all persons arriving, from Sunday, March 22.

“That is to allow people to plan out their business, as you know, you can’t announce, now for now, because you are dealing with the movement of people to and from, Barbadians coming home, as well as persons, who are already on island who are choosing to leave the country.”

Mottley said the authorities already anticipate a “continued reduction in services”, with American Airlines already indicating that it will cut its services, from next week until May 7 .

“Why we are not closing it completely, because at the end of the day, this country still needs to be able to have access to the international world, whether it is for emergency supplies, medical, emergency parts …but we anticipate that the level of flights, coming in and out of Grantley Adams International Airport, will be significantly reduced, going forward.”

She said she met with representatives of the private sector, on Wednesday, as well as the trade union movement, “and I am happy to report, for the most part, we understand the difficulties”.

“Their view, overwhelmingly, was that we should not shut our borders fully,” she added.

Mottley said she will soon inform the nation about the economic impact of the virus on the island.