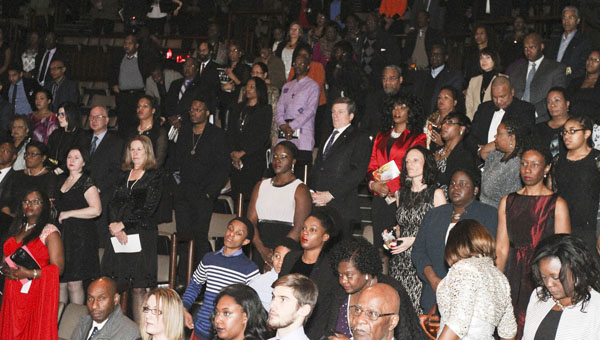 The Canadian Black community celebrating success and achievement at the African Canadian Achievement Awards of Excellence (ACAA) in 2015. Photo courtesy of the ACAA.

In The Mis-Education of the Negro, author Carter Woodson, acknowledged as the “father” of Black History, asserts that Blacks sometimes choose their own leaders but, unfortunately, they are too often the wrong kind.

We do not readily follow persons with constructive programs. Almost any sort of exciting appeal or trivial matter presented to them, may receive immediate attention and liberal support.

In many circles, we have become so intellectually lazy that we will believe just about anything from anyone, that is, as long as we do not have to do anything, except trumpet a promised land/Eden message, and if we never have to sacrifice for the collective benefit of each other.

There are so-called Black leaders who — in spite of their underhand tactics, their portrayal of themselves as honest brokers, their shadowy-deal making, and their sell-out prowess — seem to be exempt from being exposed by our community.

While the community has always had to deal with these miscreants, we have been reluctant to call them out, to expose them for what they really are.

Notwithstanding, we have among us leaders, who are 100 percent dedicated to the collective economic advancement of Blacks. These are the ones, who are usually sacrificed by Blacks, thrown out because they are a threat to the establishment, or because they are too Black. That scares some people and, sadly, we play into that fear by taking part in the very downfall of the very individuals, who would help salvage us from our economic problems.

As a community, we willingly imbibe the “Fool Aid” of those, who are only interested in themselves, only to end up in the same place — or even further behind — than we were before we took the first sip.

A change must take place. However, it will not change simply because it ought to, but it will only change when we change our behavior and our propensity for choosing the wrong kind of leader.

I have seen individuals meander through the Black community and be held up as paragons of Black betterment and advancement, all the while lining their pockets with the shameful profits from their sell-out deals with the powers that be.

They have their hands in every deal, every program, every transaction and every scenario that involves Black people, ensuring that they will be first in line to be paid. They pillage the community, and then turn around and blame the same community, for not progressing.

How can the community move forward with such deviants?

Yes, the Black community has been mesmerized, stupefied and captivated by individual preachers, politicians, and leaders, who have absolutely no interest in anything other than their own selfish interests and advancement — usually economic.

The adage, drinking the Kool Aid, was coined after a delusional, pseudo-guru, named Jim Jones, led his cult, the Peoples Temple, to mass suicide. Over 900 people, including 304 children, killed themselves by drinking from a vat of grape-flavored drink, laced with cyanide.

Plainly put, the term refers to followership at its worse. The term has become somewhat comical and caricature-oriented in its connotation. However, drinking the Fool Aid gives a much more informed and enlightened description of the inherent dangers that lurk in actualizing the term.

I argue, that Black people are far too intelligent to be reduced to a bunch of voluntary drinkers of any form of “Fool Aid”, lapping up each and every word uttered by anyone, without doing their homework and making sure that what the purveyors say is true, and illustrated by their subsequent actions. In other words, let us not believe everything that is either heard or read on the Internet.

Neither be a lackey for a shyster or a puppet for a trickster. Resolutely and collectively, the Black community should hold their leaders’ feet to the fire after they speak, and use their own judgment to ascertain the wealth of their words — or the lack thereof.

The Black community contains authentic leaders, who have “constructive programs”, but who, sadly, are seldom followed. Unfortunately, we have more folks drinking the “Fool Aid” of sellers than we have those who refuse it, or at least read the label before they are willing to take a drink.

We must start thinking for ourselves or be willing to accept the consequences thereof.