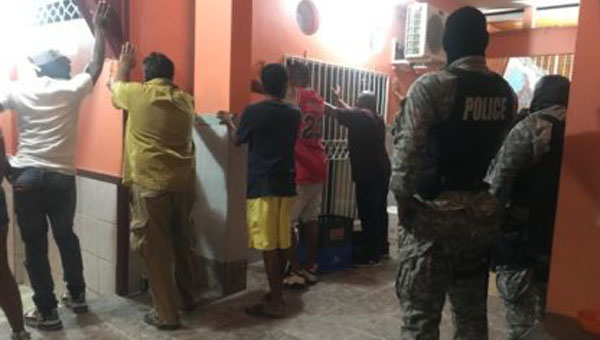 The Trinidad and Tobago Police Force -- led by its Commissioner, Gary Griffth -- made the bust at a guest house in the capital, Port of Spain. Photo credit: TTPS.

PORT OF SPAIN, Trinidad and Tobago, April 11, 2020 (CMC) – Hours after warning residents, not to hold any COVID-19 quarantine parties, Police Commissioner, Gary Griffith, led a bust at one such event, early Thursday, and has warned that flouting the law will not be tolerated.

As a result of the bust, by a team of officers from the Special Operations Response Team (SORT), at Alicia’s Guest House, in the capital, 16 people, including eight Venezuelan nationals, were arrested.

The arrests came, less than 24 hours after Griffith, at a Ministry of Health media conference on Thursday, warned promoters against hosting COVID-19 quarantine parties.

“If you did not hear, then you would feel. No more warnings. I have informants throughout the country, and we would turn up, when these people least expect it. We anticipated this, as there are similar fools, in other countries, doing same,” the Commissioner fumed, after Friday’s bust.

“There were reports of similar quarantine parties, held in cities, such as New York, where a number of people died from the virus, as a result of attending such parties. Hundreds of similar parties have been shut down in the UK, on a nightly basis. We know of copycats, so we expected promoters, here, would try to do the same thing. As I said at the media conference, this health crisis is a ticking time bomb, and now is not the time to drop our guard or become complacent,” Griffith warned.

SORT officers had gone to the guest house, around 12:30 a.m., based on information, received from one of the Commissioner’s informants.

According to Griffith, intelligence revealed that 50 businessmen had been planning to attend the party around 1 a.m., but a marked police vehicle had driven pass the guest house earlier, and may have rattled the promoters.

As a result, the Commissioner said, he and his team had to move in, earlier than planned.

“They arrived at Alicia’s, in unmarked vehicles, and were able to find the 16 persons around the pool, displaying no form of social distancing, involving Spanish speaking women, conducting lewd dancing, and all breaching the regulations, as it relates to more than five persons being assembled in the same area,” Griffith said.

The Police Commissioner said the owners of the property would also be questioned. Of the eight Venezuelans, who were arrested, Griffith said seven were women, including a 17-year-old, and some of them were scantily-dressed.

The 16 detainees, who were in breach of Regulations of the Public Heath Ordinance, implemented in March, to fight the deadly COVID-19, were taken to three police stations.

According to Section 3 (1) of the Public Health (2019) Novel Coronavirus (2019-nCoV)(No 7) Regulations 2020, where the number of persons gathered at any time exceed five, on summary conviction, persons are liable to a fine of TT$50,000 and imprisonment, for six months.