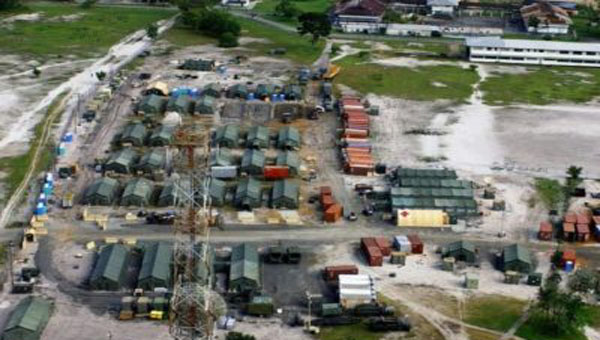 An aerial view of Camp Stephenson in Timehri, where the fatal accident occurred.

GEORGETOWN, Guyana, May 1, 2020 (CMC) – President, David Granger, expressed sadness over the death of three soldiers, yesterday, as it was disclosed that the Guyana Defence Force (GDF) has started a probe into the explosion that claimed their lives, earlier in the day.

According to the GDF, the five were involved in the preparation of pyrotechnics for demolition, when the incident occurred.

“A Board of Inquiry into the circumstances, surrounding the incident, has been launched by the GDF,” said a government statement, issued last evening.

It added that President Granger had expressed his heartfelt sympathy to the relatives and friends of the dead soldiers.

He also wished the injured ranks a speedy recovery.

Earlier this year, a soldier lost his life, and several others were injured, in a fireworks explosion, while preparing to celebrate Guyana’s Jubilee Republic anniversary in February.