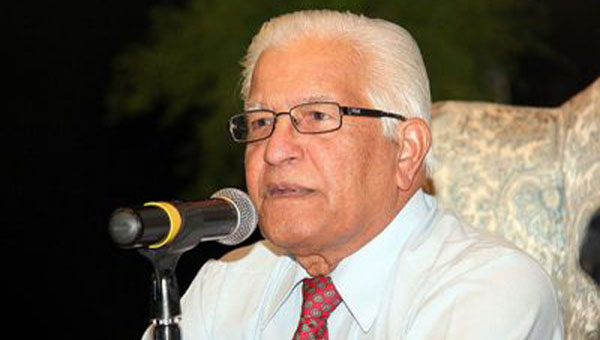 PORT OF SPAIN, Trinidad and Tobago, May 25, 2020 (CMC) – A High Court judge has granted an order, preventing the eviction of former Prime Minister, Basdeo Panday, from his private office, at the Rienzi Complex in Couva, in west central Trinidad, until the substantive lawsuit is heard and determined, later this year.

The matter has been set for July 21, for a case management conference.

Panday, an attorney and trade unionist, who served as prime minister from 1995-2001, had challenged a move by the All Trinidad General Workers Trade Union (ATSGWTU) to remove him from the building.

But Justice Robin Mohammed, last Friday, imposed an injunction, restraining the union from interfering or preventing Panday, who had served as President of the union, from 1973 until his prime ministerial appointment, from using the office.

He also granted an order, reinstating Panday’s occupation of the office space in the building that had also served as the headquarters of the main opposition — the United National Congress (UNC) — which Panday had founded in 1988.

Media reports said that Justice Mohammed, last Friday, noted that the High Court was unable to ascertain the nature of Panday’s occupation of the office space, so the issue had to go to trial.

He also did not rule out a site visit to the Rienzi Complex, so that other issues raised, can be determined.

He also said it was evident that third-party rights were introduced, when Panday’s claim was filed, as he pointed to a rental agreement, between a holding company and the union, which includes the office being occupied by Panday.

Justice Mohammed said Panday could suffer greater damage and loss, if the office space he occupied was no longer in existence.

Panday had told the High Court that when he became president general of the union in 1973, he realised the ATSGWTU did not own its own building and, it was during his presidency, that the Rienzi Complex was built to house its offices.

He said he continued to maintain an office space at Rienzi, until his resignation in 1995, when he became prime minister.

Panday said he was told by the then-General-Secretary, Sam Maharaj, that the union passed a resolution to honour his contribution to the ATSGWTU, making him honorary president general for life, and together with that accolade, he would be given an office space at Rienzi Complex, also for life.

He denied being notified of his removal as honorary president or any of the rights bestowed on him by the trade union.

Panday also claimed to have renovated the private office, at a cost of more than TT$120,000, and it was  to his “horror and dismay” that the union, on February 21, put “locks with huge chains” on the front door to the office, preventing him from getting access to it.

“This has caused me great distress, as I have many of my important documents and papers stored in the office. In addition, I have many important and significant gifts that are of great sentimental value kept in that office. Further, I am unable to attend to my many commitments, as many of my files and other important documents are housed in my offices,” Panday said, adding “I have been subject to humiliation and suffered great anguish and mental distress.”