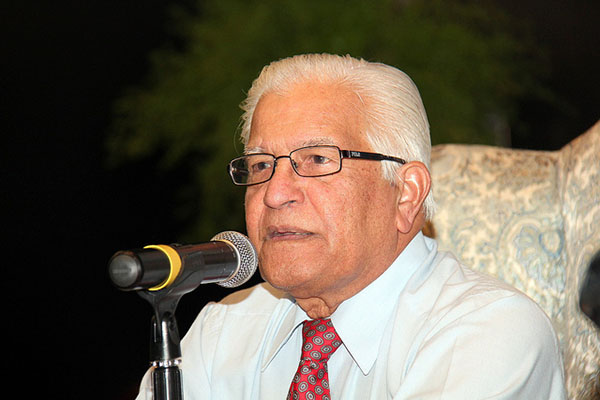 PORT OF SPAIN, Trinidad CMC – Even though he insists that he has no desire to return to “electoral politics” former prime minister, Basdeo Panday, is seeking election as chairman of the ruling United National Congress (UNC).

He is also calling for a change in the leadership style of Prime Minister Kamla Persad Bissessar, who defeated him in 2010 for the top post of the party he founded.

“I have said that I have no wish to return to electoral politics but I have been inundated with so many calls from people weeping over the fact that the UNC, which we took some 23 years to build, has all but been destroyed.

“It has lost its moorings, it no longer struggles for the things which we created it and they have asked whether I would be willing to seek office in order to return it to its pristine days,” said Panday, 80, who served as head of government from 1995-2001.

Panday told radio listeners that he was being asked to seek the chairmanship of the party when it holds internal elections next year.

“If that be their wish…So be it,” he said, noting however, he was prepared to do so “providing that I will be assured that the elections will be free and fair”.

He said that in 2010 he had indicated that the “elections were stolen and if they control the electoral machinery they will still the elections, I know that and I have no intention of taking part in an election, the results of which are known before the votes are cast”.

Panday said he intends to consult the membership of the party “because I owe it to them. Safer all I did not build this party by myself but by the blood sweat and tears of hundreds of people and if it is their wish that I should return to an active part in the party I am willing to accede to their request”.

Asked whether he thought that Prime Minister Persad Bissessar, whose coalition government of which the UNC is the major partner suffered four electoral defeats this year, should change ahead of the next general election constitutionally due in 2015, Panday replied, “Yes I think the leadership style has got to change.

“My view is that if they continue as how they are continuing they are going to lose the next elections,” he said, adding that he is no longer consulted by the UNC members on the way forward.

“I am what you call persona non grata,” he added.

But UNC Deputy Leader and Housing Minister, Dr. Roodial Moonilal, said while he would not speculate on rumours, the UNC is focused on its priorities at the moment.

“We are focused on government business right now, this is a very important time in the cycle of government and we prefer not to be distracted by the talk and the ole talk of who is running and who is not running and so on.

“When the elections come around we will meet and treat with that. He (Panday) has always been in public life and bringing healthy comments and commentaries and criticisms and so on. He has a respected view he has never left the political process so there is no issue of a return.”

Moonilal said whether Panday returns or not “is a question for him”.