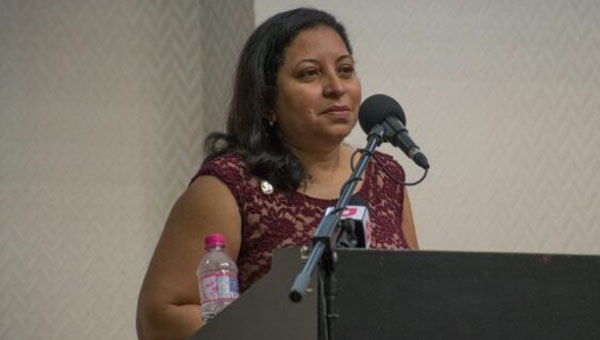 GEORGETOWN, Guyana, June 9, 2020 (PRIDE) – The University of Guyana (UG) announced, today, that it had appointed Guyana-born, behavioral scientist, Dr. Paloma Mohamed-Martin, as its first-ever, female Vice-Chancellor in its 57-year history.

Dr. Mohamed-Martin — whose area of specialization is social and behavioral change, specifically how communicative and cultural aspects of life are implicated in change — becomes the venerable learning institution’s 11th Vice-Chancellor.

The formal appointment was made, today, by Chancellor, Edward Greene, via email, to the staff of the University.

Educated at the UG, Harvard University and the University of the West Indies (UWI), Dr. Mohamed-Martin returned to Guyana, in 2007, to help re-establish the failing centre for Communication Studies and has, despite major challenges, remained passionately committed to UG’s progress in becoming a top ranking University.

In doing so, she has functioned in multiple roles: as a world class academic, researcher, beloved and inspirational behavioral science professor, as well as a dedicated and courageous administrator.

As an administrator, Dr. Mohamed-Martin has been Dean of UG’s Faculty of Social Sciences, where she spearheaded the Faculty’s reformation process, from 2012 to 2014.

Prior to that, she served as the first Director of the University’s Centre for Communication Studies, having created and run the Centre’s reform, from 2007 to 2012, under the USAID-funded Phenonix project, with Ohio University and UNESCO. Dr. Mohamed-Martin became a member of the University of Guyana’s Council in 2013; served as Chair of its 50th Anniversary Committee; Chair of the Transitional Management Committee (TMC); and was the Deputy Vice-Chancellor, responsible for Philanthropy, Alumni and Civic Engagement (PACE).

As an academic, Dr. Mohamed-Martin has produced and co-produced over 22 films and documentaries. She has also written and edited 11 books and numerous journal articles, and has received some of Guyana’s and the Caribbean’s most distinguished recognition for her work.