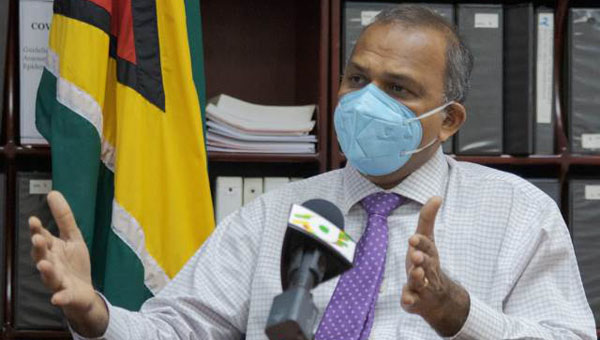 GEORGETOWN, Guyana (Monday, January 18, 2021) — Responding to questions, during last Friday’s COVID-19 update, about the more easily-transmissible COVID-19 variant, recently discovered in Brazil, Minister of Health, Dr. Frank Anthony, says the Guyana government is taking every precaution on the matter, and that land borders with Brazil have been closed, for a while now, and remain closed.

“They’re actually named variants of concern, because of the types of mutation. We are very concerned because of its proximity to us. We must pay close attention to our land border, which have been closed for some time now. We haven’t really opened our land border, and the bridge over the Takutu River has been closed,” Minister Anthony stated.

Reports from the Pan American Health Organization state that this particular COVID-19 variant may already be in several South American states.

However, because the two countries are so closely linked, economically, allowances have been granted for monitored interactions.

“We do allow, on Thursdays, very limited amount of interaction, where goods come over from Brazil and goods from Guyana go across to Brazil. So there’s a very limited interaction, and that is properly supervised by the health authorities of both countries,” the Health Minister noted

On reports of illegal border crossings, Minister Anthony answered that the authorities, on both sides, have patrols along the borders.

“We have had a problem with a lot of people crossing over the Takutu [River] illegally, and while it’s a very long border and very difficult to patrol, on our side we have the Joint Services working very hard to be able to cover that area. On the Brazilian side, they have also increased patrols. So, for some time now, movement between the two countries have been severely restricted along the land border,” Dr. Anthony added.

Minister Anthony said security and border patrols will continue to be vigilant, while the health authorities in Region Nine have been placed on alert for any changes in the epidemiological pattern.