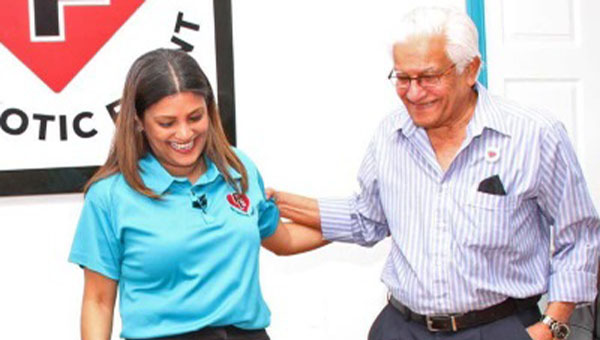 Former Prime Minister, Basdeo Panday, and his daughter, Mickela, at the announcement of her newly-founded PF party, which is contesting the upcoming elections in Trinidad and Tobago.

PORT OF SPAIN, Trinidad and Tobago, June 26, 2020 (CMC) – Former Prime Minister, Basdeo Panday, is back on the campaign trail, more than a decade after bowing out of elective politics, and while he is now seeking office, he is serving as the Campaign Manager for his daughter, Mickela Panday, who has launched her Patriotic Front (PF) party.

Panday, 87, a former trade unionist and economist, served as prime minister, from 1995 to 2001, after leading his United National Congress (UNC) into power.

But the veteran politician, who was a founding member of the UNC, fell out with the party, after losing its internal elections in 2010, to former prime minister and now party leader, Kamla Persad Bissessar.

The PF said it would be contesting all 41 seats in the next general election, constitutionally due later this year, and the younger Panday, an attorney, disclosed “what I can tell you, is that I have been approached, by a number of people, who are interested in being candidates”.

She told reporters that a vote for the PF is neither a wasted vote, nor one that would split another party’s votes.

The junior Panday observed that statistics from the Elections and Boundaries Commission (EBC) and the Central Statistical Office (CSO) show that less than half of the electorate, votes for either the ruling People’s National Movement (PNM) or the UNC.

But she made it clear, that while the PF has spoken with other political parties, “we will not be joining with anybody, for joining sake”.

She said the time for political coalitions has past, and the party will soon disclose its plans to deal with several national issues.

Among persons, affiliated with the PF, is former international footballer, Kenwyne Jones, whom Mickela Panday said, “is part of our team”.