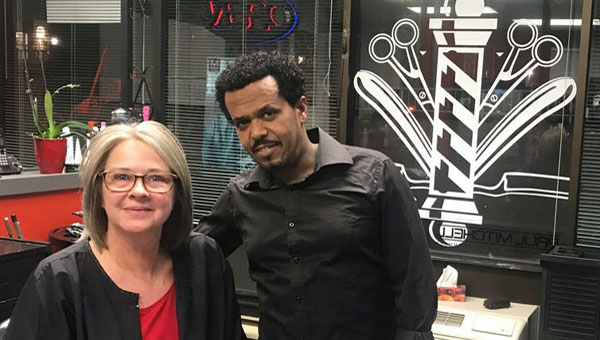 How Immigrant Entrepreneurs Are Making A Difference In Atlantic Canada

The barber from Eritrea represents the highest hopes and dreams of government policy makers in Atlantic Canada: An immigrant, who is running a business and creating jobs.

“I’m just so happy for him,” she said, watching Gebreselase being interviewed at the end of her shift. “And I’m so happy for my baby.”

Her “baby” is Splitt Ends Unisex Hair Design, a storefront salon in Halifax that Phillips opened with her mother 30 years ago and where she has worked ever since. She sold the shop to Gebreselase in September.

“It was time,” she said. “You have to have new blood, new ideas. There was so much stress: The books, managing staff. I was exhausted, just so exhausted.”

Thousands of small business owners in Atlantic Canada are exhausted. They want to retire, but in a region that’s rapidly aging and has fewer young people — and fewer still who stay —there is no one to take over or buy their businesses.

Early versions of the programs in Nova Scotia and Prince Edward Island collapsed in allegations of corruption. Immigrants had to invest in private businesses owned by local residents and it was unclear what they received in return — other than permanent resident status.

P.E.I.’s program has been the most controversial. Only 20 per cent of the immigrants who were nominated for permanent resident status between 2008 and 2013 were still in the province at the end of that period. By contrast, 60 per cent of newcomers who arrived in P.E.I. as refugees in that period stayed, and 73 per cent of family-sponsored newcomers stayed.

A 2012 change to the program required immigrants post a $200,000 bond to ensure that they stayed in the province after landing. But many have treated that as the cost of immigration and moved to Toronto and Vancouver anyway.

P.E.I. nominated 269 immigrant entrepreneurs for permanent resident status on the basis of their business plans between April 1, 2016 and March 31, 2017. Only 92 entrepreneurs qualified to get the business portion of their bonds back, and 30 of those closed their businesses shortly after. The province kept more than $18 million in forfeited bonds.

Nominated by a community
P.E.I. changed its system again in 2018. Now immigrants who want to buy a business can be nominated by a town and will be scored on a point system. But it’s unclear what is required to win a town nomination and the bond system remains in place.

New Brunswick recently relaunched its entrepreneur stream with a similar system that evaluates applications on points and requires a bond, but the price of entry is half that of P.E.I.’s: $100,000.

Nova Scotia’s new program does not require a bond. Launched at the beginning of 2016, it requires newcomers to run a business for at least a year before they apply for nomination. So far, 1,844 newcomers have gone through the preliminary process to indicate they will be applying, but the province has not nominated anyone for permanent resident status yet.

Nova Scotia and New Brunswick also have special immigration streams for international students who want to start businesses after they graduate from a local college or university.

Newfoundland does not have a provincial immigration stream dedicated to entrepreneurs.

Gerry Mills, former executive director of Immigrant Services Association of Nova Scotia, says many newcomers are starting and buying businesses, but they tend to be people who have already been in Canada for a while and didn’t come through one of the special immigration streams for entrepreneurs.

He, his pregnant wife and his three-year-old daughter landed in Canada in January 2014. Gebreselase had been a barber in Eritrea and in the Middle East. They came to Halifax because his wife has relatives in the city and they have friends in the growing Eritrean community.

He found a job at a salon in Halifax. A year later, a mutual friend introduced him to Suzanne Phillips.

Phillips’ mother and grandmother were both stylists, and her father was a barber. She launched the little shop on the ground floor of an apartment building with money she inherited from her grandmother. Her mother was her business partner.

Halifax has changed a lot since 1986, when Phillips opened Splitt Ends. The bus that stops outside her shop follows a route that serves universities that now rely on international students to survive.

One recent night, six students got off at the stop: Two dark-skinned women with intricate braids woven around their scalps; two young Chinese women with long flowing black hair, a tall, broad white man with very short hair and a lanky man with cascading curls.

“We can do anyone’s hair now!” said Phillips, who continues to work at the salon she no longer owns.

“It used to be that if a Black person came to the door, I had to say, ‘Sorry,’ because we didn’t have those skills here. Not anymore.”

No government loans or grants
Gebreselase started working at the salon last summer and bought it in September.

Staff at the Immigrant Services Association of Nova Scotia helped him navigate the sale, but there were no government loans or grants involved. The salon employs four people.

Phillips boasts about Gebreselase as a mother would: How he worked as a cleaner last summer every night from 10 p.m. to midnight after finishing his shift at the salon, how he has enrolled in a high school program at Nova Scotia Community College to fill the morning hours before the salon opens, how he fills every moment with homework or salon business.

“This fellow is a workhorse.”

Gebreselase does not brag. Asked about going to school, he said: “I need something to do in the morning.”

Asked about why he chose Atlantic Canada, and why he chose to run a business instead of work for one, he cited friends and family, and security.

“It’s quiet here, and in Canada you can do whatever you want. It’s better to have your own business. Money is nothing if you don’t have peace of mind.”

This article derives from The People Imperative. Kelly Toughill researched and wrote the report for the Public Policy Forum, which was conducting a three-year project on Atlantic immigration and revitalization.

Kelly Toughill is an Associate Professor at University of King’s College.