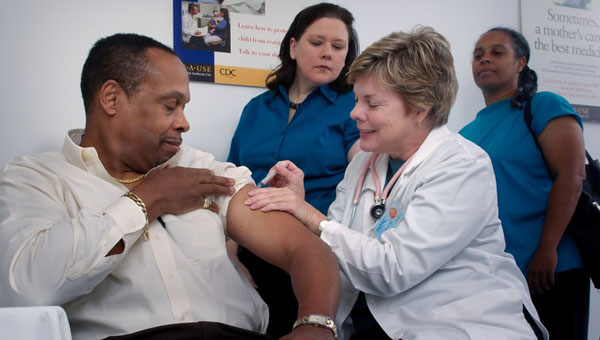 Blacks must contemplate the call to vaccinate, as the history of medical racism is legitimate. Photo credit: CDC.

Hospitals across the country are filling up again, not specifically with the demographic group disproportionately slammed by the coronavirus pandemic. Vaccination is considered as the “holy grail of medicine”, and, additionally, has been touted as medicine’s greatest achievement and the reason for the decline in infectious diseases.

The good news is that a vaccine is just days away from distribution. But a crush to the rush, lies not with the makers but with the likely takers. The troubling question however, is, will Blacks show up?

“I am not feeling this vaccine, and I’m certainly not feeling like being in the guinea pig phase,” some Blacks have shared. Such skepticism about the COVID-19 vaccine are not lone voices. Reservations about the vaccine are derived from a history of hyper-experimentation on Black bodies, inter-generational trauma as its result, and continued health disparities that resonate to this day.

Dr. Anthony Fauci, the Ddirector of the U. S National Institute of Allergy and Infectious Diseases, has recognized Blacks’ lack of trust in the medical system, but has, nevertheless, assured the audience that the speed of the vaccine does not compromise its safety nor scientific integrity.

However, with concern, the Director mentioned the lack of diversity in the clinical trials for the vaccine, and wished that more minorities were in them, intoning that “what’s safe and effective should not be only for whites”.

However, let us not be deceived, no amount of money can assuage or erase the collective trauma of living the history of medical experimentation done on Black bodies. It is in their historical DNA.

Most Black Americans, young and old, cannot shake off the Tuskegee Syphilis Experiment or Tuskegee Study, a clinical study conducted for four decades, from1932-1972; to observe untreated syphilis on African American men, under the guise they were receiving free health care.

Initially the study involved 600 black men – 399 with syphilis and 201 who did not have the disease — and was conducted without the benefit of patients’ informed consent. These men were told by researchers that they were being treated for “bad blood”, a local term used to describe several ailments, including syphilis, anemia, and fatigue.

In fact and reality, they did not receive the proper treatment needed to cure their illness. In exchange for taking part in the study, the men received free medical exams, free meals, and burial insurance. Although originally projected to last 6 months, the study actually went on for 40 years. The Tuskegee Study’s deleterious effects on these men, their families, and their offspring have resulted in a lifelong hell of mental and health complications.

J. Marion Sims, celebrated as the “father of modern gynecology”, whose likeness is memorialized in statues and whose name appears in medical textbooks, practiced the surgical techniques that made him famous, on enslaved Black women: Lucy, Anarcha, Betsey, and unknown others. Thirty surgeries were performed on Anarcha alone, all without anesthesia, as it was not yet widespread.

He also invented the modern speculum, and the Sims’s position for vaginal exams, both of which he first used on these women. In 2018, a statue, erected in his honour in 1890, was finally removed from New York’s Central Park. The statue stood across from the New York Academy of Medicine.

Sims perfected his revolutionary tools, like the vaginal speculum, a double-bladed surgical instrument used for examining the vagina and cervix, and other gynecological surgeries, on enslaved Black women, without the use of anesthesia.

He operated on Black women, without anesthesia, in part, because he didn’t believe that Black women experienced pain in the same way that White women did, a dangerous and false sensibilit,y whose remnants linger to this day.

Sims went on to offer the procedure in Europe to wealthy White women, who were sedated.

Black people are not largely anti-vaxxers, but the current high levels of hesitancy are understandable. Notwithstanding, who is better to promote a product, aimed at treating and meeting a nation, than not one but three former presidents? Former Presidents, Barack Obama, George W. Bush and Bill Clinton, have stated that they would publicly take a coronavirus vaccine, once it’s available in the U.S., as a means of encouraging skeptical Americans to do the same. They have volunteered to get theirs on camera.

The unfortunate fact is that Black people in America have been well-trained, over centuries, to distrust both the government and the medical establishment on the issue of health care.

While the concerns and refusals are unfortunate, do not forget the historical roots of Blacks — it was the vaccinators who taught them how not to trust.