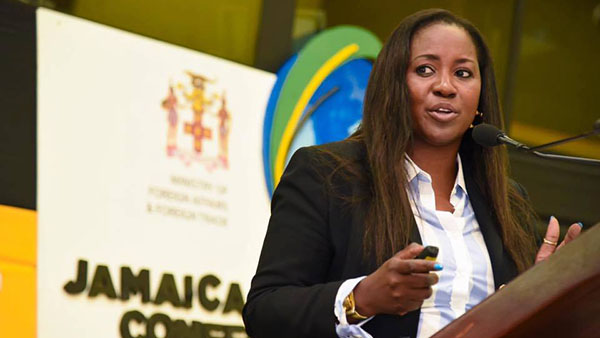 KINGSTON, Jamaica August 2, 2017 — Raised in the community of Mountain View, in Eastern Kingston, Jamaica, and migrating to Canada as a teenager, Nadine Spencer is a member of the Diaspora who has established herself as a recognizable worldwide brand.

As president of a leading international marketing and communications agency, Brand EQ, Spencer says she had quite a journey getting to the top of her field.

Left in the custody of a caregiver who was anything but caring, she was removed from school and made to run errands.

“At the age of 12, my mother migrated to Canada. She left me behind with a caregiver that took me out of school and had me go to Spanish Town to buy bammy for her. I lived in Mountain View so you can imagine the journey. She gave me no bus fare for returning home. I only had one ticket to go, enough money for the bammy and I had to figure the rest out,” she shares.

“When I got to the market, one thing I realised, very quickly, is that there was value. I negotiated with the bammy woman. She would sell six for one price and I would negotiate that she give me eight for the same price and then I would take the bammies and go to another corner of the market and I would buy parchment paper and package it and resell the bammies for more money. That gave me enough money to make my way back home and buy lunch and it also gave me resources. That is where my journey into business and marketing was born,” she adds.

She specialises in public relations and global communication strategies. To date, she has led several multi-million dollar campaigns for companies such as Mercedes- Benz, Four Seasons Hotels and Resorts and Jamaica National Building Society.

She has also served as Director for the Food Network Delicious Food Show; served on numerous corporate and not-for-profit boards, and is also a philanthropist.

A major achievement for Spencer was being a part of the White House Special Advisory Committee on Women’s Issues and Marginalised Communities under the Presidency of Barak Obama.

The communications and marketing specialist says she was pleased, not only at the invitation, but also that it was because her company’s brand stood out.

“When my company was invited to participate in the White House talks, they Googled me first and my brand stood out. When we create a structure it is brilliant, when we create a marketing plan it is dynamic also. We watch what the competitors are doing and we go 10 steps ahead. We are very innovative as an agency and that has been our strength,” she tells JIS News.

The communications executive was a presenter at one of the plenary sessions, “Small Businesses-Big Ideas… Toward Investments in SMEs and Social Business Enterprises”, at the just-concluded Jamaica 55 Diaspora Conference, in Kingston, Jamaica that ran from July 23 to 26.

Spencer says she has never been deterred by what some may see as a major hurdle to success, being a Black Jamaican woman in business. In fact, she says she has used that to her advantage.

Her company, which has its base in Toronto, Canada, now has branches in the United States of America and Jamaica. The move to Jamaica, she informs, is part of her goal to build a communication strategy for Jamaica that highlights its best qualities.

“My goal is to show the country and the companies and businesses that exist here as well as the people. There is a story about Jamaica that is not who we are, and what I want to do is work to change that paradigm in how Jamaicans are perceived and show that we are hard workers and we will get the job done to a superior standard,” she says.

Her ultimate goal is to have branches in the United Kingdom and other top global markets, leveraging technology and expanding Brand EQ’s portfolio.

In the future, Spencer says she would love to do more work with young women through a foundation that she hopes to establish, to help grow their businesses.

“I would really love to work with young women in business, to talk about the processes, the steps and other alternatives that we can use to spin their businesses into something profitable,” she says.