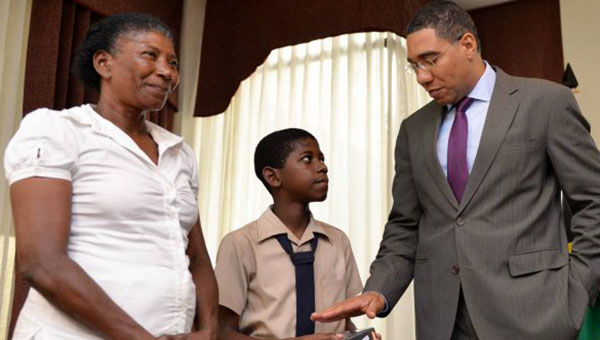 Prime Minister, Andrew Holness (right), gives words of encouragement to Grade Six student at Browns Hall Primary in St. Catherine, Omade Williams (centre), after gifting him with a computer tablet at the Office of the Prime Minister on Wednesday, May 11. Omade’s grandmother, Veronica Gordon, is at left. Photo credit: Yhomo Hutchinson/JIS.

KINGSTON, Jamaica May 11 (JIS) — Omade Williams is a Grade Six student at the Browns Hall Primary School in St. Catherine, who dreams of becoming a pilot.

Recently, moved by happenings in his community, he penned a letter to Prime Minister, Andrew Holness. He began his letter with a focus on the alcohol habits of youngsters, and suggested measures the Prime Minister could put in place to prevent underage drinking.

He also wrote about himself. He sealed the letter and with his mother, Rose Gordon, turned up at the Office of the Prime Minister, with the hope of delivering it directly to Holness.

Impressed by the young man’s confidence and determination, the Prime Minister invited him to a meeting.

“I was quite taken aback that they just came to the gate of the office and said they wanted to speak to the Prime Minister. This is unusual. He had a letter that he wanted to deliver and I saw him and gave him the opportunity to read his letter to me,” Holness told JIS News.

On Wednesday, May 11, Omade had the opportunity to again meet with the Prime Minister. This time, he brought along his younger brother, Joel Folkes, and his grandmother, Veronica Gordon.

Omade and his brother were presented with computer tablets by the Prime Minister during the brief meeting.

“He has a very touching story and we have given him the computing power and I am certain he is going to do well,” Holness told JIS News.

Acknowledging the gesture, the bright young man apologized to the Prime Minister for not having had the chance to write another letter saying thank you, but said he is very grateful for the gift.

The Prime Minister encouraged him and his brother to use the devices to advance their education.

“Every child should have one of these…and you are going to help your little brother to use his,” Holness told Omade.

Omade, who sat the Grade Six Achievement Test (GSAT) in March, said he hopes to be placed at St. Jago High School. He expressed confidence that he has done well in the placement examination.

His mother, Rose, agreed that Omade is a good performing student. “I feel wonderful and awesome. I never expected this, but I am grateful,” she said of the gift.

“He does fairly well in school and he really tries. My hope for him is just that he succeeds in life,” she added.

As for Omade, he is in a hurry to start working on an overdue assignment to do research on technology and how it was first created, which he was not able to do before without access to the computer.

“I feel great and I hope (the Prime Minister) can help other children to further their education,” he said.