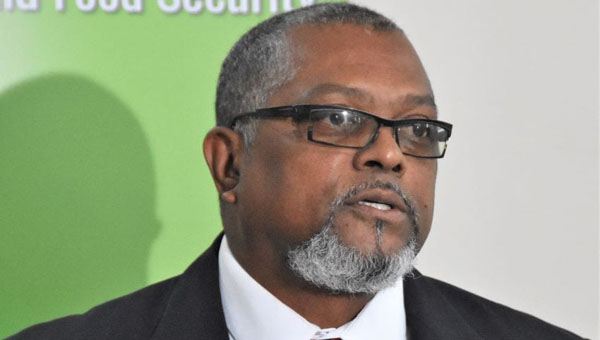 Barbados Minister of Agriculture and Food Security, Indar Weir, is calling for a critical analysis into sizeable price increases.

ST. PHILLIP, Barbados (Tuesday, August 17, 2021) — A government minister is calling for a critical analysis to determine why consumers carry the burden of price increases, but don’t benefit from reductions.

Minister of Agriculture and Food Security, Indar Weir, expressed this concern, as he responded to questions from the media, about projected increases in feed prices by as much as 26 percent.

Speaking after the launch of the Pesticides Container Management Scheme at the River Plantation, last Wednesday, the Minister said, he “strongly” supported competition in the market, as the presence of monopolies in small markets could result in consumers losing their sovereignty.

“I have seen what competition can do.  And, really and truly, it comes down to how we will get other entrants into the market, and what role they will play in making sure that the consumer gets the best value for the investment, and, equally, that the businesses involved also get the best return on investment,” Minister Weir outlined.

He explained that the lack of competition would result in a situation, which he has observed, across the board, where “the flooring” is raised during increases, and remains the same, even when prices are reduced.

“Each and every time it has changed, it is to the disadvantage of the consumer, and at the time, when the inputs come down, you will find that prices don’t drop proportionately.

“And therefore, my concern is that we need to zoom in on this, and look to see how we can do the critical analysis to determine what is happening, why consumers continue to have to carry the increased costs and don’t benefit from the reductions in the same way that the provider, or the business or the investor would benefit from the increase,” the Minister underscored.

However, he noted that Pinnacle Feeds, the lone manufacturer of feed in Barbados, was being impacted by the rising price of freight and grains, adding that this would inevitably, impact their bottom line, which they would need to recoup.

But, the Agriculture Minister said, the government’s concern was surrounding the level of the increase.

“Initially, we started as a 10 percent [rise] and the government of Barbados committed to putting in a $2 million support to cover a three-month period.  This was May, June, and July.

“And at the end or before we could reach the end of July, before going back to negotiations, we saw that there was information in the press, suggesting that the price would go up by as high as 26 percent,” Weir lamented.

He added that he met with the new owners of Pinnacle and an agreement was reached, to hold off until August 6.

The Minister said on August 6, he informed Pinnacle’s management that options were being considered, which would be discussed at tomorrow’s meeting, before a determination is made on the projected 26 percent increase.