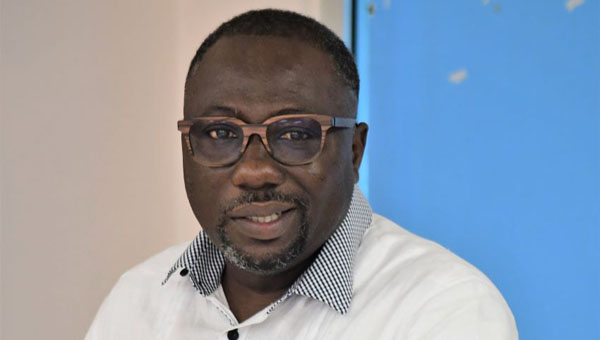 BRIDGETOWN, Barbados (Wednesday, November 24, 2021) — Young people in Barbados have been urged to see violence, whether in the form of traditional or social media, and condemn it.

The plea came, on Monday, as Minister of Youth, Sports and Community Empowerment, Dwight Sutherland, addressed a presentation ceremony that saw winners of the Anti-Violence Essay Competition receiving their prizes at the Ministry’s Sky Mall, Haggatt Hall headquarters.

Alluding to some stories in the media, he said: “When you pick up your newspaper and you look at the front page and you see a gun with an ‘X’ through it, or somebody dying or another death from violence… at the end of the day, that is the media messaging we are talking about … young man 15, 16 years… why he died?  What was he doing? Some involved in drugs, some involved in other forms of deviant behaviour.”

Noting that the Anti-Violence Essay competition targeted students, aged 13 to 15, Sutherland declared that the Ministry was cognizant this group had ready access to all information, through various devices, some of which may not always be positive.

“I would wish to emphasise however, that some of these young people may not be involved in deviant or criminal behaviour but, through them, we can reach other youth, and further to that, we can spread the message of anti-violence, and they can help us understand what youth in that age group are thinking,” he stressed. 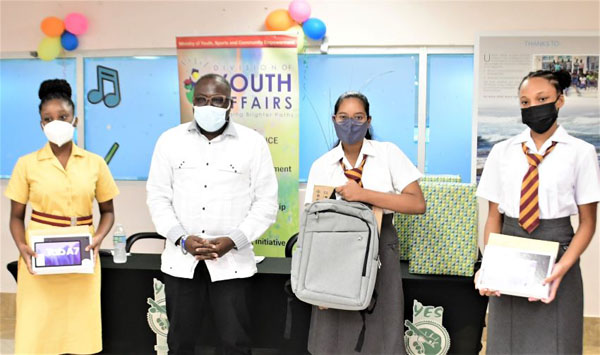 Minister of Sports, Youth and Community, Empowerment Dwight Sutherland (second from left), with Harrison College students, who swept the prizes for the Ministry’s Anti-Violence Essay Competition on the Impact of Media Violence on the Youth. From left to right are: Jaideen Hewitt (second place); Sarah Bisram (first place); and Woletta Israel-Yaicob (third place). Photo credit: BGIS.

Further pointing out that the competition was conceptualised, in recognition of the words from the Anti-Violence Essay Jingle, The Pen is mightier than any loaded gun, the Youth Minister added, it sought to cater to youth with an affinity to writing, and wishing to express views on violence and its portrayal by the media.

Sutherland, who noted his Ministry was listening, said it was prepared to invest the time and the effort to convert students’ messages into meaningful and realistic initiatives.

“Violence is a scourge and is one, which requires continuous and sustained programming. This Anti-Violence Campaign cannot, therefore, be a one-year initiative, but must continue, so that we can ensure that our social capital, our communities and our young people can live, work and socialise in a safe and secure environment, while at the same time, being able to enjoy a high quality of life….

“You have what it takes to transform our society and to make Barbados the best place to live, work, do business and raise a family. Violence is painful and it hurts families and societies. It requires us to inject significant resources into our justice system and in our health sector,” he said, adding that Barbados spends a lot of money on its justice system, recidivism and incarceration, which could be utilised elsewhere, in programming and within communities.”

With 26 entries received, over the four weeks of the competition that was coordinated online, he stressed the outcome was “very positive”.

Harrison College made a clean sweep of the competition, with Sarah Bisram, Jaideen Hewitt and Woletta Israel-Yaicob winning first, second and third prize, respectively. Harrison College, along with St. Winifred’s School, were also named as the two top performing schools.