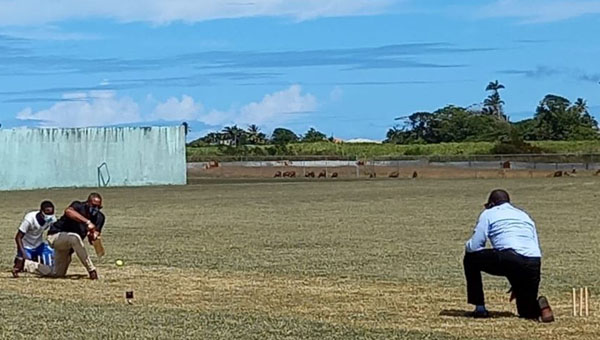 Minister with responsibility for Culture, John King, plays a shot against Sports Minister, Dwight Sutherland, at the launch of a Marble Cricket initiative at The Lodge School on Wednesday. Photo credit: J. Carrington/BGIS.

ST. JOHN, Barbados (Friday, November 26, 2021) — Marble cricket, a well-loved Barbadian past-time that was used as the launch pad for the cricketing career of some of the island’s top players, was revived, Wednesday, through an initiative by the Lodge School, as the nation transitions to a republic.

Minister of Youth, Sports and Community Empowerment, Dwight Sutherland, and Minister in the Prime Minister’s Office with responsibility for Culture and National Development, John King, along with old scholars, present students and others were present for the exhibition match of the Marble Cricket Initiative, at the school, in Society, St. John.

The initiative was spearheaded by the school’s old scholars, who have formed the 246 Think Tank, “The 95%”, to bring the game back, as an added sporting activity for the students.

Sutherland praised the initiative, adding that the marble cricket’s revival, on the heels of the nation’s 55th anniversary celebrations of nationhood, symbolised Barbadian culture and folklore.

Tracing the origins of the game, the Minister referenced an article in one of the daily newspapers, in which National Hero, Sir Garfield Sobers, said he first started playing a form of cricket, known to Barbadians as “marble cricket”, when he was four or five years old, before graduating to “hopping ball “cricket.

Sir Garfield added: “The pastime of marble cricket was a definite favourite amongst many of us, and features well with another popularly-played sport with its origins in Barbados, and that is road tennis.”

The Minister of Sports commended the Think Tank for recognising the value of marble cricket as a sporting asset, which can be developed, locally and beyond, but can also be one of the “cultural heritage features, within the tourism industry”.

Sutherland, an alumnus, said the school’s motto, Possunt Quia Posse Videntur — “They can because they think they can”, was not only a wonderful message to impart to young people, but was an impactful message for the thousands of young boys and girls, who have passed through the grounds of The Lodge School.

Meanwhile, Minister King, also an old scholar, told the audience that marble cricket was a part of the school’s culture in the past, and it was now “fitting, that Lodge School be a part of getting that culture to a new generation of Barbadians”.

“One of the things that we always have to guard against is, comparing the things that we create to other things. Yes, the game may have been created, because people could not afford bats or to play normal cricket, but it speaks heavily to the ingenuity of our people.

“For me, that is the most important aspect. The same thing with road tennis. They couldn’t play lawn tennis, but they came up with a game, in all respects, similar to both lawn tennis and table tennis. Our people designed the bats; they designed all of rules…and the ball… These are things, as Barbadians, that we must celebrate,” he stated.

Principal, Robin Douglas, remarked that, as a result of the trans-atlantic slave trade, many of the enslaved had lost much of their culture and heritage, and believed that reviving the sport represented an opportunity to “regain and reclaim something that was indigenous to Barbados, that is truly Barbadian”.

“246 Think Tank, The 95 %, has been particularly visionary in what they have decided to do here, through their insight… and showing love for the game, a Bajan tradition is about to reborn,” he underlined.

After the formalities, the old scholars and present students played an exhibition match, which was won by the present students. Players on both sides received trophies as a memento of the event.