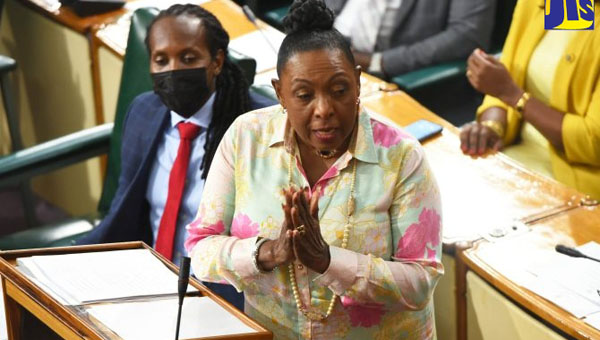 Jamaica's Minister of Culture, Gender, Entertainment and Sport, Olivia Grange, makes her presentation in the 2022/23 Sectoral Debate in the House of Representatives on June 8. At left is Minister of State in the Ministry, Alando Terrelonge. Photo credit: Rudranath Fraser/JIS.

Making her contribution to the 2022/23 Sectoral Debate in the House of Representatives on June 8, Minister Grange informed the House, that recruitment for the Unit has commence, and some officers will come on board, as of July 1.

Additionally, she said consultant, Danny Roberts, has been engaged to assist with the setting up of the Sexual Harassment Tribunal and related matters.

The Culture and Gender Minister explained that the Tribunal is the body to hear and determine complaints of sexual harassment at the workplace and other institutions, and to adjudicate on complaints, by a worker, of the employer’s failure to act on such complaints.

“We have already started to receive complaints, and we have been helping companies to put the necessary mechanisms in place, to respond to them,” the Minister told the House.

Grange added that, so far, the Bureau of Gender Affairs has assisted 200 organisations to draft their sexual harassment workplace policies.

She said sensitisation and awareness-raising sessions with public and private-sector organisations, non-governmental organisations (NGOs), educational institutions, and other groups have also been conducted.

“This is not a simple matter. It is a serious crime. Unwanted sexual advances, requests for sexual favours and crude sexual behaviours affect quality of life, by creating an intimidating, hostile, or offensive environment. No one should endure that,” she emphasised.

Minister Grange said the Ministry has been doing the work towards the full implementation of the legislation. The landmark Sexual Harassment (Protection and Prevention) Act, 2021 aims at tackling sexual harassment in Jamaica.

The legislation addresses concerns about sexual harassment that are employment-related, occurring in institutions, or arising in the landlord and tenant relationship.

It contains provisions for dealing with sexual harassment in the workplace, schools, correctional institutions, places of safety, nursing homes, medical and psychiatric facilities, among other places.