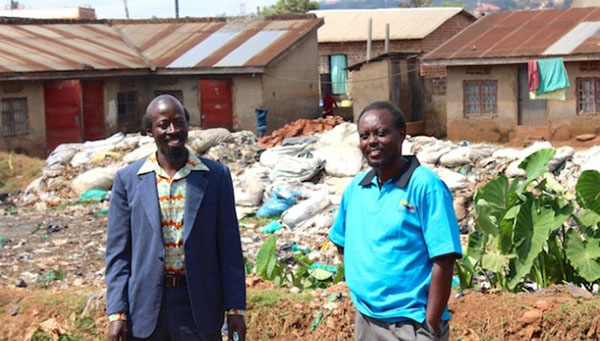 KAMPALA  (IPS) – For four years Isaac Godfrey Nabwana made and sold bricks in Kampala’s Wakalinga slum. But now, thanks to his labours, he is building what he hopes will become Uganda’s answer to Nollywood.

“I was selling bricks and from [the sales] I bought a video [camera]. I worked very hard to get it,” the director, producer and writer tells IPS as he gives a tour of his audio and film studios in the slum.

Nabwana, 40, has made about 35 movies in the last five years. He now produces “between three and five” a year, all in the local Luganda language with English subtitles.

“I’ve got a computer, which I built myself because I buy [the] parts. I’ve got floodlights, which are not really professional, but they work.”

“The movie industry in Uganda is a growing industry, young but fast growing,” says Nabwana.

There are four film companies in Wakalinga, including Ssosha Film Productions Ltd, LAP Film Productions and Nabwana’s own Ramon Films. Though there are a number of others scattered across this East African nation’s capital of Kampala.

“I think it’s going to become the Hollywood of Uganda, of Africa, because we’re doing the action movies which are not done elsewhere in Africa. Done by Ugandans, edited by Ugandans, produced by Ugandans,” says Nabwana.

But the continent-wide reach of Uganda’s film industry is still a long way off. The local film industry churns out about 30 movies every year, while Nigeria’s Nollywood, in comparison, makes about 70 a week. However, Nigeria has a population of 162 million people, while Uganda is a smaller country with only 34.5 million people.

There is no doubt that the local film industry is still fledgling. This week the inaugural Uganda Film Festival is being staged from Aug. 26 to 31 by the Uganda Communications Commission (UCC) in Kampala. It involves exhibitions, workshops and training with mentors from South Africa, Sweden and Nigeria. It also has forums to discuss business interests, and open-air screenings of 189 films in five locations across the capital.

“The main aim is to see the status of the film industry,” UCC director of broadcasting, Jonas Bantulaki, tells IPS.

Uganda has not settled on a proper moniker for its film industry, says arts journalist and film critic Moses Serugo.

“There’s Pearlwood [referring to the ‘Pearl of Africa’, often used to describe this east African country] but Ugandawood or Ugawood gets thrown around a lot,” he tells IPS.

There are two strands to the Ugandan movie sector, Serugo says. There are the “uptown film makers”, which includes the graduates of Maisha Film Lab, a non-profit training initiative for emerging East African talent, founded in 2004 and run by Indian director and Oscar nominee Mira Nair.

“Then you have the downtown filmmakers who are more commercial, who are just about churning out films and distributing them on DVD,” Serugo says.

In the Cineplex cinema at Oasis Mall in Kampala, Officer Down starring Stephen Dorff, The Reluctant Fundamentalist, directed by Nair and World War Z, with Brad Pitt, are showing.

Derrick Musuguya, 24, who has worked there for a year, says they do not show local movies yet, although when they once played a combined Ugandan-Nigerian production it was well received. Cineplex may start showing Luganda films early next year, he says.

Artist and musician Denis Dhikysuuka, 25, goes to the movies at least once a week. “Ugandan movies are picking up, but I like Western movies because there’s so much to learn from them,” he says.

Nabwana makes his films for under 10 million Ugandan shillings (about 3,875 dollars), using the profit from his brick-making business to fund his movies.

Once they are finished, DVD copies are peddled door-to-door for 1.16 dollars a copy.

Production staff and even the actors, who often have to fork out for their own transport, supply their own wardrobe and do their own makeup, are not paid and only earn money when they sell the movies.

Nabwana says he makes little profit. He can invest about 4,000 dollars in a movie but only make a quarter of it back.

Nabwana’s latest movie, Revenge, is the tale of a kind-hearted Ugandan businessman who helps his friend and is then beaten to death. A ghost then appears to revenge his killing. “It’s based on a true Ugandan story,” Nabwana claims. It premiered in a movie hall in Lukwanga, in Kampala’s suburbs, about three weeks ago.

Earnest Sseruaayna plays one of the bad guys in Revenge. The married father of two and Wakalinga resident was a welder, who also sold charcoal and washed cars for a living, before pursuing his dream of becoming an actor at age 31.

He spent a year making Revenge and pockets about 232 dollars per movie.

“I am making a lot of money [from this],” says Sseruaanya, who has appeared in 15 Ramon films in the past five years. “It’s better than doing something else. But some are struggling to make a living.”

Serugo points out that Uganda has no film commission even though the industry could create thousands of jobs for unemployed graduates. “I think we really need a film commission, [like] you have initiatives in South Africa, [where they have] the National Film and Video fund or the Gauteng Film Commission.”

He says Uganda’s neighbour Rwanda, which he says does not necessarily have a “more advanced” film industry, has shown “more initiative in recognising film as a big contributor to the creative economy”.

In Rwanda, known as the “land of a thousand hills”, the country’s Development Board finances the film sector and training and has conceived “Hillywood”, the Rwanda Film Festival.

Bantulaki agrees that a film commission would be an “ideal situation” and that it was something “we’re aiming for”.

But the lack of a local regulatory film commission will not stop Nabwana from making movies.

“We are doing it, we are doing it,” he says, his eyes lighting up. “Elsewhere in Africa, maybe Americans come with their projects. For us, we do it ourselves here.”