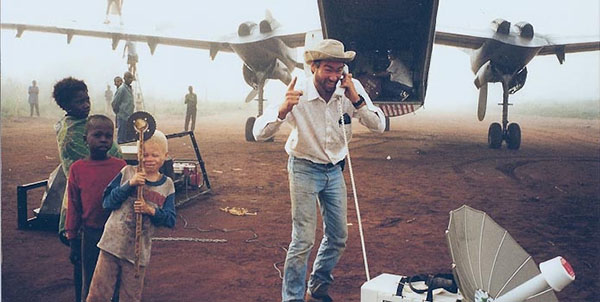 “Mission Congo,” which played at the Toronto International Film Festival last month, is a powerful documentary that points an accusing finger at the American televangelist, Pat Robertson.

The film, directed by Lara Zizic and David Turner, presents evidence that Robertson misappropriated money donated for his charity, Operation Blessing International, and used it to fund his own for-profit enterprise. The charity was purportedly helping survivors of the Rwandan genocide who had poured into the Democratic Republic of the Congo (then Zaire), where thousands died of cholera.

Robertson, a multimillionaire and champion of the American religious right, used his Christian Broadcasting Network to raise millions for the charity. He had himself photographed amid smiling refugees in the Goma refugee camp and later declared his efforts a success. But Bill Sizemore, a newspaper reporter with The Virginian-Pilot, who spent years researching Robertson and his financial operation, believed Robertson’s reports of “success” and his degree of involvement in the relief effort to be a misrepresentation. He alleged that most of the money his viewers donated was not going toward food and medicine for the refugees. Instead, Sizemore argued, it was funding Robertson’s diamond extraction operation, run by his for-profit African Development Co., hundreds of kilometres away.

The film builds upon Sizemore’s research, with testimony from eyewitnesses, from pilots who transported materials for Robertson and from members of the group Medicins Sans Frontiers (MSF). The evidence is convincing and Robertson’s apparent misrepresentations are appalling.

Robertson claimed his charity was at the forefront of saving lives in the Goma camp, but the pictures he showed on television were of MSF doctors, not associated with Robertson’s charity, according to the film.

An airstrip was built near the refugee camp, the film says, purportedly to fly in doctors and relief supplies. But few flights brought supplies to the camp, claims a pilot who worked for Robertson. Most refueled and proceeded to the diamond operation. One eyewitness claims dredging equipment purportedly shipped to the refugee camp for agricultural purposes went straight to the diamond site. Dredges are instrumental in extracting diamonds from river beds.

Robertson, who is based in Virginia, tried to have Sizemore fired. A state investigation found plenty of evidence supporting Sizemore’s allegations but no charges were laid; both the then-attorney general and the governor had received significant campaign donations from Robertson.

Although the film shows plenty of television footage of Robertson touting his charitable work, he refused to be interviewed for the film. And since it premiered, he has threatened to sue the filmmakers.