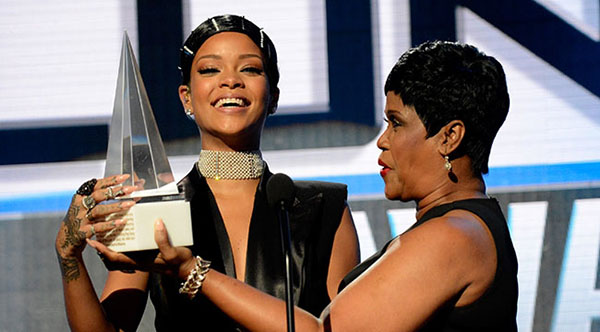 “This is a triumph not only for Rihanna and her family but indeed for Barbados,” said Lashley in a statement.

According to Rolling Stone, following a stunning performance of her song, “Diamonds,” Rihanna accepted the first-ever Icon Award at the American Music Awards, last week Sunday night. It was presented to her by her mother, Monica Braithwaite, following a video commemoration from Jay Z and a video montage showing her career highlights.

“I know the journey and your career has not always been an easy one,” Braithwaite said. “But tonight I applaud and admire you for being so strong and so positive and so humble and so focused. I’m so blessed to be part of this historic moment.”

Rihanna used her acceptance speech to recall her youth. “Thank you so much,” she said. Turning her direction to her mother, she continued, “I’ll start by saying just about 20 years ago is when I really started making your life a living hell with my ‘annoying little husky man voice,’ you’d call it. And I mean just disrupting the entire neighborhood. . . I annoyed every one of my neighbors.”

Following thank-yous to a bevy of people, including Jay Z and producer Antonio “L.A.” Reid, she ended her speech by expressing her disbelief: “I can’t believe that at 25 years old I’m holding an Icon award,” she said.

Culture, Sports and Youth Minister Lashley gushed, “As a proud Barbadian, I, too, felt as though I had received this award. It was a glorious moment to see this humble, intelligent young woman, who just a few short years ago was still a schoolgirl attending Combermere School and living in Westbury Road, transformed into a fashion and music icon, being acknowledged by one of the greatest countries in the world for her craft.”

According to Lashley, the world has recognized Rihanna’s talent and ability and the award serves as a source of inspiration for young artists in Barbados.

He said her success reinforces the work of his Ministry to develop the cultural industries, recently strengthened by Parliament’s passage of the Cultural Industries Development Act.

Lashley said his Ministry will continue to “work assiduously to set up the appropriate infrastructure to provide training in various disciplines, to ensure that our cultural products and services reach world class standards.”

“Rihanna’s success reinforces what we have been saying all along, that is, the arts can be a viable employment alternative. We know Rihanna is just the beginning, there are many more talented Barbadians waiting for the right moment to emerge,” he said.