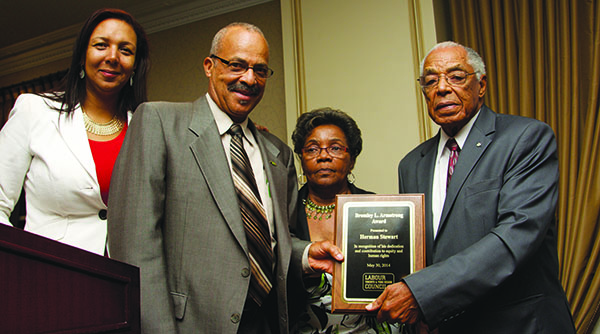 TORONTO, Ontario – Herman Stewart, the 2014 recipient of the Bromley L. Armstrong award, is inspired by the man in whose name he was honoured, and with whom he sat at a table last Saturday.

Initiated by the Toronto & York Region Labour Council, the award was presented to Stewart for his hard work and dedication to issues of equity and human rights.

Stewart was born in Westmoreland, Jamaica and immigrated to Toronto in 1969 at the age of 20.

After completing his educational studies at Centennial College and York University in the 70s, while at the same time getting married and starting a family, he got his first taste of union involvement when he played a key role in organizing his workplace that had 500 employees.

At the award presentation on May 30 at the Spirales Banquet Hall in Toronto, Stewart said the last time he felt like how he was feeling on Saturday was in 1987 when he became the first person of colour to be elected to serve on any federation of labour executive board in Canada.

He was elected vice-president of the Ontario Federation of Labour executive board.

Stewart said it was proud moment for him then and to now receive a human rights award that bears the name of Bromley Armstrong made it that more special for him.

“Bromley has inspired me over the years. In 1980, when I appeared before the Labour Relations Board, Bromley met me, he pulled me aside, he told me that there’s only a few of you and staff in any union in Ontario. I’m going to put together the names and phone numbers and I want you to keep in touch with them because it’s only a few of you and you guys have to work together to get more of you.”

After the United Steelworkers were certified as the bargaining agent in 1975, Stewart was elected chief steward and chairperson of the grievance committee. In addition, he was also elected to the union’s bargaining committee and was the chairperson of the political action committee. During the ensuing five years he was an active volunteer organizer with the USW union.

In 1980, he was hired by the International Ladies’ Garment Workers Union (ILGWU) as an organizer, and one year later he was promoted to director of organizing.

During this period, Stewart became involved in the Jamaican Canadian Association (JCA), at Armstrong’s prompting, where he served in many capacities, including president.

“He told me that I want you to get involved in your community. It’s good that you’re so involved in the trade union movement, but your community needs you and the Jamaican Canadian Association is the best community organization. So, in 1981, he stood up at the meeting and he is the one that put my name in nomination and I was an unknown and they voted for me because Bromley recommended me.”

Stewart said when he became president of the JCA, the first person he went to for counselling, after being elected, was Bromley.

“He has meant a lot to me over the years and getting the award is the icing on the cake.”

Stewart has been a strong advocate on behalf of the Afro-Caribbean community in Ontario speaking out and lobbying governments on issues such as employment equity, human rights, police/community relations and immigration.

As a trailblazer, he created history in 1986 when he became the first person of colour in Canada to be elected head of a union.

During his time as leader of the International Ladies’ Garment Workers Union – Ontario Division, he implemented many progressive changes, such as changing the union newspaper from an English-only publication to one that was published in five different languages in order to better reflect the make-up of the membership.

Under his leadership, the union in partnership with the employer’s association was able to secure government funding to build a 140-unit apartment building, which provided affordable housing for garment workers.

During his time as OFL vice president, Stewart served as labour’s representative on the board of governors of George Brown College, as well as the Ontario Training Corporation Board.

Stewart was one of the leaders of the successful campaigns to have minority representation on the Canadian Labour Congress and the Ontario Federation of Labour Executive Boards. He is a founding member of the Ontario Coalition Black Trade Unionists.

Now working at the Ministry of Labour, he admits that the transition from trade unionism to the Ontario ministry was tough.

“What I told myself was I’m not totally divorced from the union because I’m settling disputes between unions and employers. I know how the union thinks, I know how the union reacts so I think it would be a plus, and I think over the 24 years I did mediation, the union benefited from my experience and I was able to settle a lot of disputes that normally would end in strikes. There weren’t too many strikes with the files that I did because of my background in the labour movement,” he said.

He said that experience served him well as a mediator and in terms of being neutral and being fair, whether he was in the union or not, he was always known as a fair person so it didn’t compromise his thinking.

Stewart is a member of the transition and restructuring team of the JCA. He is quite pleased with the new changes at the organization.

“I moved the motion over two years ago that we should have a committee that investigates the separation of the social services from the membership side. They have expanded on that and went from one to three. What I see taking place is positive because I think with the new structure, the JCA is going to go back to where we were in the 80s and in the 70s when social justice issues were front and centre and we were pushing the government on immigration, we were pushing the police on better treatment and we were pushing the school board to open up so that we could have teachers that look like us.”

“By going the route we are going now, I’m positive that we’re going to become a stronger voice in the community and we’re going to do more advocacy when it comes to social justice issues.”

The 2014 honouree was introduced by June Veecock, a former recipient of the award, and also a former director of human rights at the Ontario Federation of Labour.

Speaking at the presentation, Armstrong said he was disturbed by relatively recent events of racism that have taken place in Ontario: the distribution by anti-immigration flyers by the group, Immigration Watch, in Brampton; the schoolyard beating of a Black student at Sutton District High School in the York Region District School Board; and the attack on Chinese fishermen near Sutton.

However, he was pleased that some high school students in Brampton responded to the racist flyers with one of their own, showing the multicultural city in which they live. He also commended the Urban Alliance on Race Relations for speaking out publicly about the beating of the student at Sutton District High School.

Armstrong declared that human rights and social justice advocates have fought and survived groups like the Klu Klux Klan, Nazis, etc., and will still be around long after groups like these reach their demise.

The evening featured the premiere of the movie, “Welcome to Dresden” featuring Armstrong and Ruth Lor in their test cases of discriminatory policies in businesses in Dresden, Ontario in the 1950s.

Organized by the Joint Labour Committee for Human Rights, their efforts resulted in the passing of the Fair Accommodations Practices Act in 1954.

Marie Clarke Walker, the master of ceremonies, was recently re-elected as the national executive vice-president of the Canadian Labour Congress.